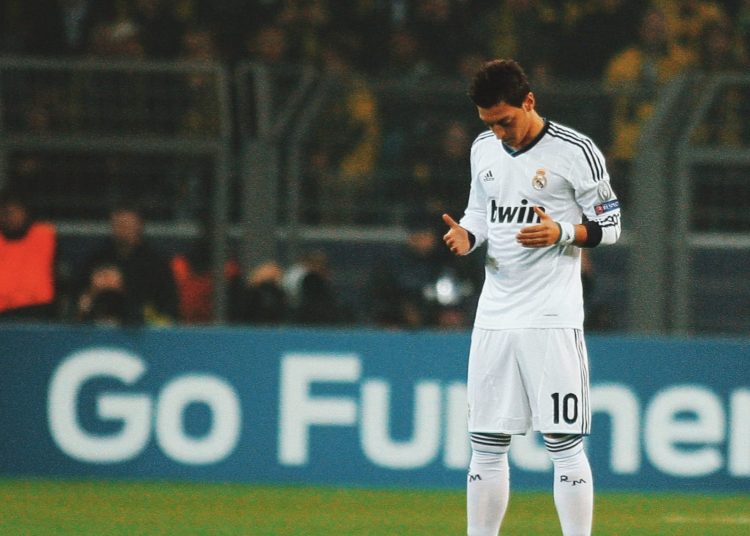 Arsenal star, Mesut Ozil has left a lot of questions on the minds of fans after he posted a picture of himself wearing a Real Madrid kit to mark his Friday.

The 31-year-old has been blowing warm and cold in his performances for the Gunners over the last few seasons and has, in recent times, found himself on the bench, getting limited game time since the departure of Arsene Wenger.

His recent tweet does him no good as fans questioned his loyalty after he posted a picture of himself wearing the jersey of Real Madrid – a club he played for from 2010-2013 before joining the Gunners.

Ozil has been at the north London club for seven years but current manager, Mikel Arteta does not consider him to be part of his plans.

The club also wants to offload him as he is their second-highest earner, on a weekly salary of £350,000 despite not contributing much to the progress of the team.

Why the Real Madrid top? Kinda disrespectful to Arsenal 🤨

why are you posting your Madrid photos btw? disrespectful to Arsenal.

Even me no approve of this one sir.

Why didn’t he use this picture pic.twitter.com/5n7bZLwNa0

Takabala Allah , you can pray wearing Arsenal shirt too. pic.twitter.com/VFq7AJLRno

Ozil is too controversial to be a footballer, he lacks professional ethics. It’s a shame.

This is why arsenal fans can’t stand him, there’s plenty of pics of him doing this stance in a arsenal top but he chooses to post this pic when he’s at Madrid. Get him out the club

Since his debut at the club, he has made 184 appearances, scoring 33 goals and providing 58 assists in the league for the Gunners.

During his time at the club, Ozil has helped the Gunners win four FA Cup trophies and a Community Shield.