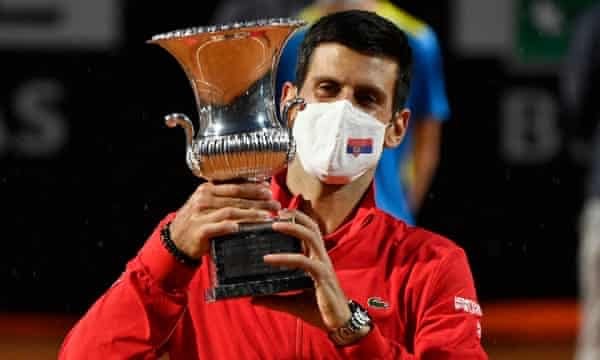 Novak Djokovic picked up where he left off before his US Open default two weeks ago, winning a fifth Italian Open title on Monday, days before the start of Roland Garros.

The world number one lifted a record 36th Masters crown, one more than great rival Rafael Nadal, after beating Diego Schwartzman 7-5, 6-3 in the final at the Foro Italico in Rome.

“Turning to Paris, I couldn’t ask for a better tournament here in Rome. Another big title and I’m super pleased,” said Djokovic.

Djokovic extended his record to 31 wins from 32 matches this year, with his only loss the US Open disqualification for accidently hitting a line judge with a ball.

But he ran out of steam in a final played under light drizzle, having also spent more than three hours on the court in Sunday’s semi-finals