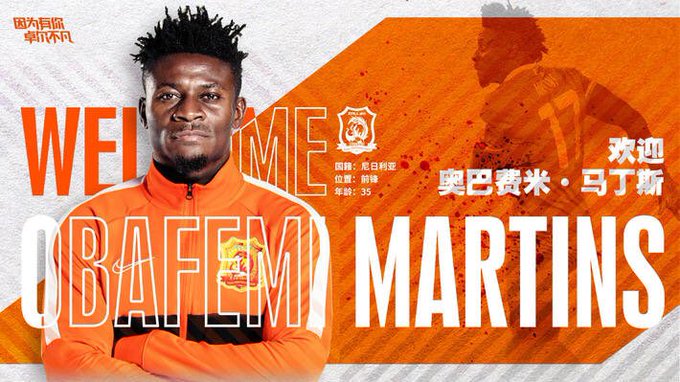 Obafemi Martins has joined Chinese Super League side Wuhan Zall as a free agent after his departure from rivals Shanghai Shenhua.

The centre-forward was handed a one-year contract by the Han Army, who finished sixth in the Chinese top-flight last season.

The striker returned to football in July, rejoining the Flower of Shanghai, having been without a club since 2018 due to a hamstring injury.

The former Nigeria international made four Super League appearances for Shanghai Shenhua before leaving the club.

The 35-year-old will hope to prove he still has all it takes to play at the top level with the Dongxihu Sports Centre outfit.

Martins enjoyed great success in his first stint with Shanghai Shenhua after teaming up with the side in 2016 from MLS club Seattle Sounders FC.

The forward featured in more than 40 games for the Flower of Shanghai during his time with the side and played a key role as they clinched the Chinese FA Cup title in 2017.

Martins played for Ebedei and Reggiana youth teams before he moved to Inter Milan in 2001, where he spent six years.

The striker scored 28 goals in 88 league games for the San Siro outfit before leaving the side for the Premier League in 2006, joining Newcastle United.

Martins spent three years with the Magpies and was the toast of the club fans with his eye-catching performances and breathtaking goals.

His acrobatic goal celebrations also endured him to the supporters and helped the club maintain their Premier League status during his stay, scoring 35 goals in all competitions from 104 games.

The fleet-footed forward has also featured for Wolfsburg, Rubin Kazan in Russia, Levante in Spain before he signed for Seattle Sounders FC in 2013.

Martins had 42 caps for the Nigeria national team and featured for the side at the 2010 World Cup in South Africa.