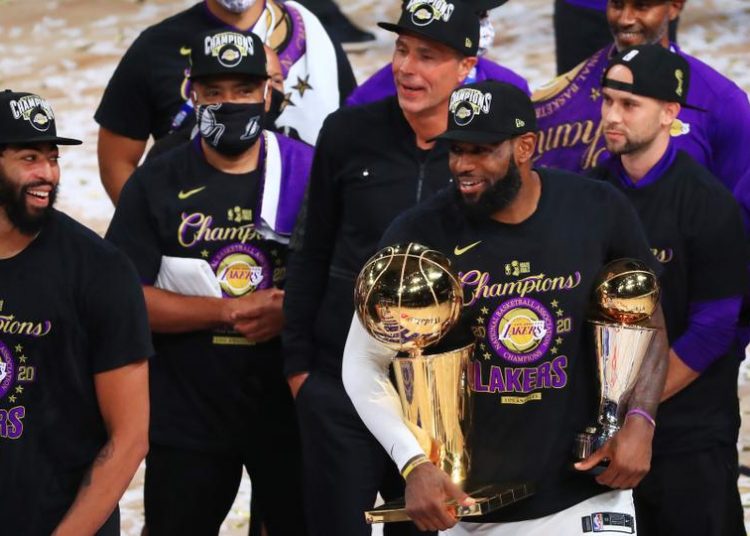 The Los Angeles Lakers ended a decade-long wait for a 17th NBA title as they beat the Miami Heat 106-93 to seal a 4-2 series victory.

Victory ties the Lakers with the Boston Celtics for the most NBA championships.

“It means a lot to represent this franchise,” said James.

“I told [Lakers president] Jeanie [Buss] when I came here that I was going to put this franchise back in the position where it belongs.

“And I want my respect too.”

Before this season the Lakers’ had failed to reach the play-offs for six consecutive years and their long-awaited success comes after a campaign like no other.

The NBA Finals would have been done and dusted in the spring were it not for the global spread of coronavirus that shut the season down on 11 March, hours after it was declared a pandemic and several players tested positive for the virus.

The season eventually re-started on 31 July, but with no fans courtside. Played behind closed doors at Walt Disney World in Florida, players entered a bio-secure bubble – which the Lakers will now leave after more than 90 days away from friends and family.

They last won an NBA title in 2010, but it was those six years when they failed to reach the play-offs that best illustrated their fall from grace.

Change was on its way though, with firing and hiring at management level and the blockbuster arrival of James – then a three-time NBA champion – from the Cleveland Cavaliers.

That was followed by the signing of Davis in June 2019, with whom James teamed up in a partnership that just clicked. They led the Lakers to the top of the Western Conference, and ultimately to the very top of the NBA.

James becomes the first player in NBA history to be named Finals MVP with three different teams (Lakers, Cavaliers and Heat). Now with four MVPs to his name, he trails only Michael Jordan, who won six.

“Thinking I have something to prove fuels me,” said James. “No matter what I’ve done in my career up to this point, there’s still little rumblings of doubt, comparing me to the history of the game… ‘Has he done this, has he done that?’

“Having that in my head, saying to myself why not still have something to prove, I think it fuels me.”

'Approach is going to be different' against Qatar - C.K Akonnor