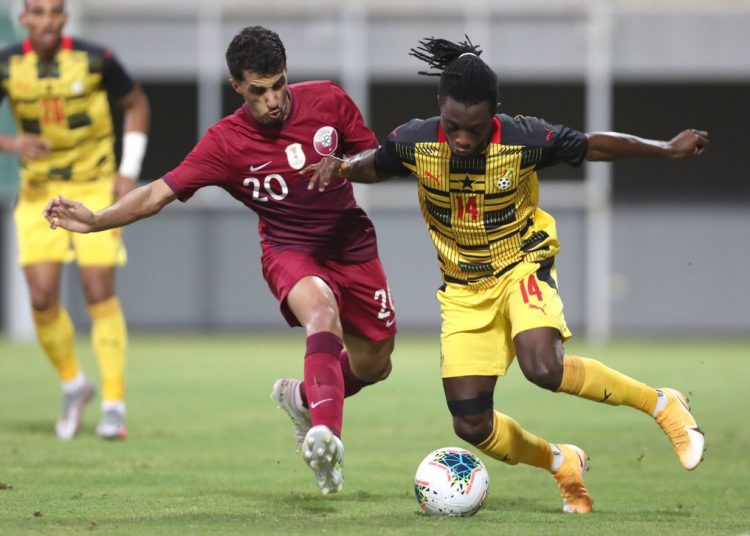 The Black Stars took to the field for the second time in four days against Qatar on Monday earning a thumping win over the Asian Champions.

Head coach, C.K Akonnor’s first win in charge of the side must have felt particularly satisfying for the former Black Stars captain, given their collapse against Mali.

The match against Qatar saw massive improvements from the Black Stars players who, along with Akonnor, were heavily criticised by Ghanaians for phoning it in last Friday.

While the heavy win was an indication that the Stars had fixed the flaws from the previous game, a number of people feel celebrating a win against a team that is 15 places below you after losing badly to a side that is two places further down is a bit premature.

However, on the face of it, it’s clear that C.K Akonnor’s side played much better on Monday, and the stats back this.

The Black Stars drew blanks against Mali on Friday.

It was the first time the Stars had failed to score in a match since their 0-0 draw in the group stages of the 2019 AFCON against Cameroon. The frontline of Andre Ayew, Jordan Ayew and Eugene Ansah failed to breach the backline of the Malians over 90 minutes.

On Monday against Qatar, however, that was promptly rectified, with Tariq Fosu scoring the opener for the Stars in the 22nd minute. They scored four more over the course of the match, with 3 different players getting on the scoresheet.

The Stars aren’t known for their prolificness in front of goal – in their last 20 matches before Monday, they’d scored three or more goals three times, only once getting more than three in that time.

So it was a bit of a relief for many Ghanaians seeing them fill that particular statsheet.

Shots and shots on target

It wasn’t surprising that the Stars did not find the net against Mali, particularly when they managed only one shot. Their only shot in the game wasn’t even on target. Mali on the other hand had five shots on goal, with four on target – they scored with three of them. Considering the Stars had the top scorers for both Swansea and Crystal Palace last season in their lineup, this was unacceptable.

Again, C.K Akonnor’s side made up for this, almost to a ridiculous degree, with 24 shots in total, with only four of them failing to hit their mark. You can’t score if you don’t shoot and it’s no coincidence that the Black Stars netted five goals when they did find their shooting boots.

Surrendering 53% of possession in a game might not seem like a big deal but for the Black Stars against Mali, it was.

For a team without too many pacy players like the Stars were against the Malians, controlling possession was absolutely crucial. A midfield of Thomas Partey, Bernard Mensah and Alex Djiku were outplayed by the Malians and conceded possession a little too often. Akonnor switched things up against Qatar by bringing in Baba Iddrisu to Partner Partey in midfield while pushing Tariq Fosu and Samuel Owusu out wide This resulted in a steady performance with the Stars dominating possession (54%) and picking up the big win.

Offsides are pretty crucial in determining how ready a team is positioning-wise. Ghana’s four offsides against Mali showed that while passes were being made forward, they were either rushed by the passer or found the receiver positioned poorly.

In the Qatar encounter, the Black Stars were caught offside only once, narrowly escaping the linesman’s flag for Andre Ayew first goal and Owusu’s strike. The Stars made efficient use of the ball for much of the game, with the improved passing, movement and positioning proving that the extra training sessions with Akonnor might have made a difference.