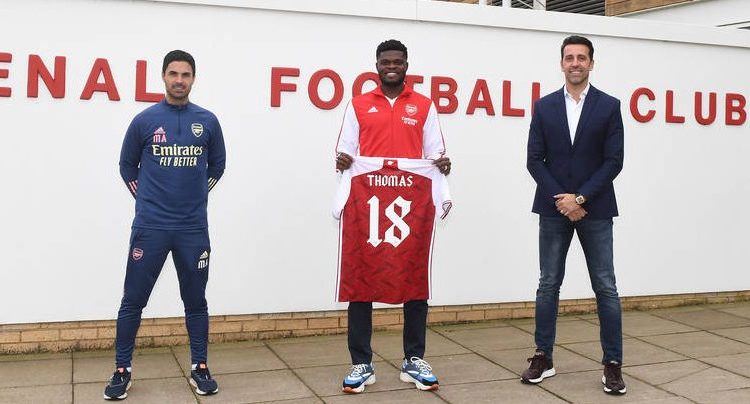 The North London-based club completed the signing of the 27-year-old on transfer deadline day as they triggered his £45million release clause to take him away from the Spanish side Atlético Madrid.

The #NoThomasNoPartey had to be delayed for a while due to the international break as the 27-year-old travelled to Turkey to play for the Black Stars of Ghana in two friendly games.

The wait for fans of Arsenal was over on Tuesday, October 2020 when the player arrived at the club, so they could officially unveil him.

With regard to starting in the crunch game against Manchester City, Mikel Arteta disclosed the club will assess his readiness in their training sessions ahead of the game.

“Well he was here just yesterday, he is getting familiar with everything around the club,” Arteta said.

“Today he will have his first training session, so everything has to come really quickly for him. We knew that before we signed him that he is fit, he is very willing to start playing, and we will see how he goes in the next few days.

“I have seen the buzz around the place, the fans are really happy, I have seen some really positive reactions after we bought him, the same with the team, the squad, and the staff. I think he is a player we had the radar on for a long time, and we have managed to bring him in and I think he will be a really important addition to the team.

“He got to know some of his team-mates [already]. Not all of them, because some are still on international duty, but we will have everyone back today and it will be a good day for him to get to know everyone.”

Arsene Wenger used to say that it takes foreign players six months to adapt to the Premier League – but what does Arteta make of that?

“I think it is something very individual, depending on many factors,” he said.

“How they settle first here in the city with their family, whether they speak the language or not, whether their qualities fit the team and the Premier League more straight away or if they need some adaptation and some development in those areas.

“It is very particular, you see some players adapt really quickly and some others taking a long time.”