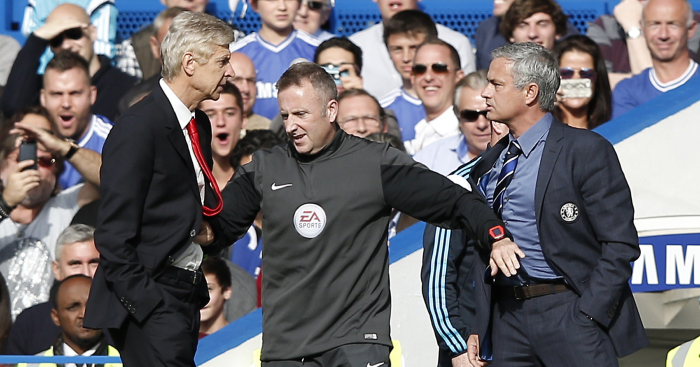 Spurs boss, Jose Mourinho has once again ignited old flames as he aimed a dig at Arsenal’s legendary manager, Arsene Wenger after the Frenchman completely left him out of his latest book.

Managerial rivalry in football is normal and Jose Mourinho and Arsene Wenger were at each other’s necks for over a decade.

Their rivalry is perhaps the most heated, and can only be matched by the competition between Wenger himself and Sir Alex Ferguson.

The biggest difference between his rivalries with Mourinho and Ferguson is that Wenger and the Scotsman would eventually came to respect each other and swapped pleasantries in their final few years as rivals.

The jousting between Jose Mourinho and Arsene Wenger was so heated that the pair had to be separated on the touchline during a league game in 2014.

However, in the last two years, their rivalry has toned down after the Frenchman left his role as manager of Arsenal, following 22 years in charge of the North London-based club.

Arsene Wenger has an autobiography coming out titled ‘My Life In Red And White’ and one would think that with all that had ensued between them, Jose Mourinho would have at least a page in the book, but he doesn’t.

After all these years away from heated, passion-filled managerial antics, the Spurs boss, Jose Mourinho did not mince words when he had the chance to get at the 70-year-old again on why he cannot be found in Wenger’s book.

“Because he never beat me. You are not going to do a chapter about 14 matches that you never win!

“So why should he speak about me in a book. A book is to make you proud!”

The two legendary managers met on 19 occasions in the opposite dugouts to each other with Mourinho successful on 10 occasions.

It’s not true that Wenger never won against Jose though, with the Frenchman notching up two wins, and there are actually seven draws between them.

In Wenger’s record against other managers, the 0.68 points he earned per game against the ‘Special One’ is easily the lowest than against anyone else he’s faced more than five times.