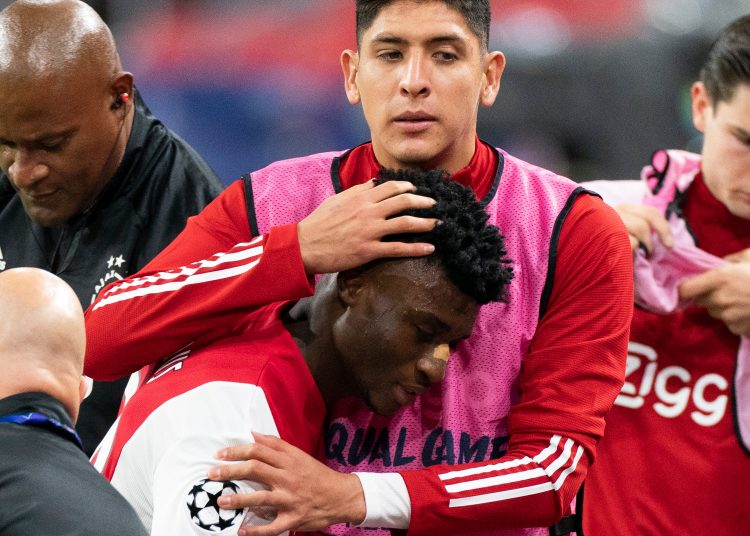 But much like the player, Ghanaians who had tuned into the game to catch a glimpse of the 20-year old in action were left disappointed after he picked up a knee injury just 6 minutes into the game.

Kudus had been making waves in the Dutch league since joining Ajax from FC Nordsjalland and picked up two Man of the Match awards in his three games played so far.

Collision resulting in Kudus injury. Surprisingly, Macca says it’s not a foul, but the strikers gone off with knee injury. pic.twitter.com/5Z5F20DLkX

But what should have been an opportunity to show his talent to a much wider audience, ended in a nightmare, leaving many Ghanaians taking to social media to vent their frustrations.

Here is a selection of some tweets following Kudus’ injury.

At his local neighborhood in Nima, Accra where many had gathered to watch Kudus, tears flowed after the injury.

Sad mood here in Nima where we are watching Ajax's UCL game against Liverpool. They came here for @KudusMohammedGH but will have to sit through the rest of the match watching others play. Kudus' senior brother in the shot close to tears. #3Sports #UCL pic.twitter.com/HLbp1rjxwC

Joy Sports journalist George Addo Jnr said he could not continue to watch the game after Kudus picked up the injury.

Kudus debut in the Uefa champions league cut short by injury..Hopefully not a bad injury..

Kudus gets injured after about six minutes into his UCL debut. Bummer!!!

Kudus hurt. I no go watch again. I bore!

Kudus was a big miss for Ajax. A real game changer unfortunately cuz of his injury. He really would have troubled us..

Ajax say a scan and diagnosis will be conducted to determine the severity of the injury to Kudus who had just returned from an injury lay-off that forced him to miss Ghana’s two friendly games against Mali and Qatar early this month.

The Ajax Manager, Erik Ten Hag said of Kudus’ injury:  ”Kudus’ injury was disappointing but we easily found a replacement. You saw that when Promes came on and the system stayed the same. I can’t give you any details on Kudus situation because it’s just after the game. We have to wait for the exact diagnosis.”