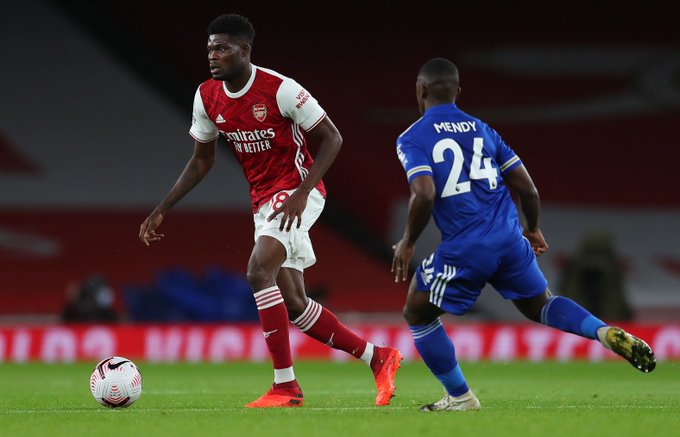 Ghana deputy captain, Thomas Partey, made his full home debut for Arsenal on Sunday night when Arsenal hosted Leicester City at the Emirates Stadium in the Premier League.

Arsenal lost the game 1-0 after Jaimie Vardy came off the bench to score the winner late on.

Partey, 28, had put up a man of the match performance in midweek when Arsenal beat Rapid Vienna 2-1 in the Europa League on Thursday.

Expectations were high for the Ghanaian in his first home game but things did not go according to plan for the former Atletico Madrid who made a 50 million Euro switch to Arsenal in the summer.

No player was dribbled past more times in the first half of #ARSLEI than Thomas Partey (2).

Apart from being dribbled past more times than any other player in the first half, Partey also made zero interceptions, attempted zero shots and made zero tackles.

The numbers have not amused Arsenal fans who have taken to twitter to vent their frustrations.

Just as we were told, Thomas Partey is indeed a magician.

He simply disappeared against Leicester City on Sunday.

The real Thomas Partey is probably somewhere in London arguing that Ghana Jollof is better Nigeria’s , He will appear in the next game hopefully .

Partey disasterclass in his first Prem start? Inject it pic.twitter.com/8C645mlI2z

Imagine getting cooked by Harvey Barnes