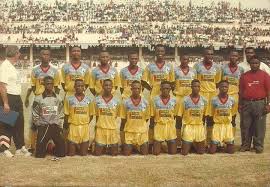 Obuasi Goldfields, now Ashantigold managed to halt the decade and a half long dominance by Asante Kotoko and Hearts of Oak by winning the 1993/1994 Ghana Premier League title.

The “gold diggers” found gold, in their quest to supremacy, leading the league from start to finish.

There have been suggestions Ashantigold were the only ‘truly professional club’ in the country as they had their own stadium, full-time managers, and salaried players.

Prior to the commencement of the ’93/94 season, the Ministry of Sports ordered all clubs to register as Limited Liability Company in October 1993.

Due to the strict adherence to structure and plan, the league lasted a little over six months (one of the shortest).

An impressive start to the season

Led by English coach, Dave Booth, Goldfields kicked off their season with a 2-0 win Ebusua Dwarfs. That followed with victories over Afienya and Dawu Youngsters.

The defending champions, Kumasi Asante Kotoko, played the league into the hands of their regional rivals right from the start of the league.

As a matter of fact, Kotoko started their season in an awkward fashion. Their players refused to turn up on the opening day of the league season against Real Tamale United.

It was reported that the players were still struggling with management over allowances due them in their abortive Africa Cup campaign which saw them lose 7-6 on penalties to Zamalek of Egypt in Cairo.

Goldfields were a dominant side, scoring for fun and letting in little, but the vital win against Accra Hearts of Oak definitely showed just how determined they were.

A season prior, they finished second, two points behind Kotoko and with consistency, they were well on course to finish the mission they failed to accomplished.

On February 6, 1994, in what seemed like a balanced game, Yaw Acheampong and Annor Aziz scored in quick succession in the dying embers of the first half to completely shatter the dreams of “The Phobians”.

A series of misconduct left some matches unfinished.

One significant incident that happened was a match between Ghapoha and Real Tamale United.

Ghapoha’s top striker, Tony Teiku was brought down and apparently in pain. A stretcher came on the pitch to take him off but the team insisted he was treated on the field of play. Suddenly, a man wearing a smock, together with a group of men came on the pitch and rushed on the referee, E.F Okuampah, and beat him mercilessly.

The referee was quickly rushed to the hospital as fans trooped on the pitch to fight each other. Ghapoha were however handed the maximum points because they were leading 1-0.

While Goldfields were thriving, scoring for fun, Mighty Royals were busily shipping in the goals. They conceded a total of 40 goals after 22 games and managed to win just two games all season.

They earned their first point of the season after a 1-1 draw against Great Olympics. They managed to secure just two wins all season and drew three times in the process.

In fact, they conceded the second-least number of goals (14) behind Asante Kotoko (13).

They however scored the highest number of goals (38), ten more than Accra Hearts of Oak (28).

At the end of the season, Goldfields accrued 34 points followed by Asante Kotoko (27), then Accra Hearts of Oak (26) and Great Olympics complete the top four (26). 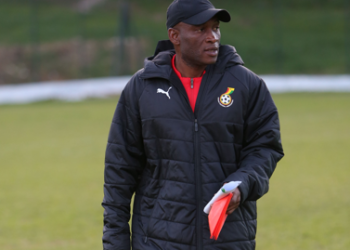 2022 CHAN: We will improve as the tournament progresses – Narteh Ogum