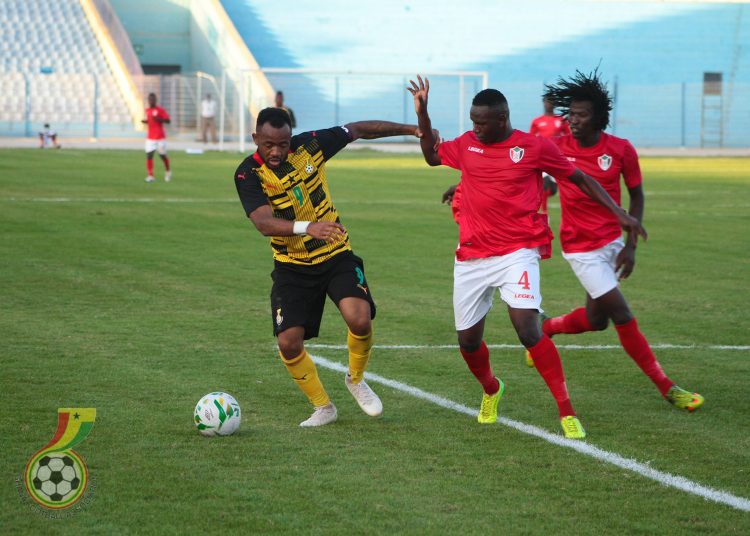 The 2-0 victory against Sudan in Cape Coast meant a point today would have qualified the Black Stars to Africa’s showcase. The Ghana Black Stars had only one job; avoid defeat. Somehow, this task proved too much for the Black Stars as their Sudanese counterparts showed their resilience and got the maximum three points with a classic Smash & Grab performance in the dying embers of the game.

This defeat means Ghana needs to win against South Africa (Away) or São Tomé & Principe (Home) to qualify. A simple dissection of the several contributing factors to this loss are highlighted below.

Since the announcement of the Stars squad for this round of fixtures, numerous questions have been asked about the squad, ranging from ‘Is it good enough? To ‘Is this our best?’ to ‘Do some of them even play enough?’ to ‘Why call the old men?’ among others.

The addition of John Boye, Baba Rahman, Mubarak Wakaso, Afriyie Acquah and recently Fatau Dauda, indicated that Coach CK, had his eyes set on qualification at all costs. As at July 2019, all the above named had appeared a combined 214 times for the Stars. These warriors have appeared (ex Baba Rahman) have even appeared at the World Cup. The decision to call such experienced heads was spot on by Coach CK. All suggestions indicate the call up of Baba Rahman was an emotional one rather than one backed with technical or football reasons.

Baba Rahman has not played enough and was unfit to play in two full 90 minute games in the space of 5 days. The result was obvious as Sudan targeted the left back from the opening whistle in Cape Coast till the final whistle in Omdurman. As he lacked match fitness, the Sudanese launched all their counter-attacks by going through spaces left behind the left back. The late goal conceded was assisted via a cross from Baba Rahman’s side of the field. John Boye, since returning to the fold for the Black Stars, has been a dominant centre back; playing much like he does for his club FC Metz with various blocks and clearances. However, all this good work was undone in the 90th minute as he lost his man, Mohamed Abdel Rahman, who made no mistake putting the ball past another returnee to the squad, Fatau Dauda.

The starting XI in Omdurman confused most; myself included.

Fatau Dauda going straight in, is one that was based purely on him being experienced and able to handle the pressure of such an away game.

Nicholas Opoku coming in at RB ahead of Christopher Nettey was on that baffled many as Nicholas Opoku was only useful in defensive phases of the game and blunt going forward hence limiting the attacking outlets for the Stars. It also seems CK wanted to have a 5 Man Defence in defensive transitions with Tarique Fosu joining the set up as the wing back then transitioning into a 4 man defence when attacking. This approach also exposed Baba Rahman heavily as he faced 2 men of the Sudanese attack whenever Black Stars were defending.

Alexander Djiku and John Boye are forming a good understanding with Djiku responsible for bringing the ball out of defence and Boye acting as the Cover Defender in most defensive situations.

John Boye was definitely one of the many actors in Ghana’s conceded goal.

The midfield set up was very lacking in creativity as two holding midfielders were placed in front of the defence. This meant when Black Stars got the back from their defence, their options were to go long to locate isolated Caleb Ekuban or play into space for Jordan Ayew and Tarique Fosu to chase after. All the attacking options starting for the Black Stars XI were not creators and it was telling as Black Stars had only one attempt on goal.

Coach CK approached the game with a tad of negativity and it allowed Sudan to grow in confidence as the game went on. If the set up had some creativity in it, it would have made Sudan a bit more cautious in their offensive approach.

How CK should have Set Up

A team with a well-oiled engine of Ashimeru, Acquah and Wakaso would always be first to second balls and generally have better possession of the ball, this would have drawn Sudanese midfielders to chase the ball a bit more and force some of their players out of position to allow Samuel Owusu and Jordan Ayew, the room needed to create opportunities for John Antwi.

Another start for Chris Nettey was necessary as his offensive explosiveness would have occupied the Sudanese left-winger Al-Tash Ahmed and Abdallah Faris at Left back.

The creativity and imagination of Clifford Aboagye could have offered the Black Starts an alternative to the long balls into space.

Starting Schlupp at Left Back would have offered Baba Rahman valuable rest before any introduction for him in the second half if needed. Baba Rahman suffered from exhaustion towards the end of the first half.

Black Stars game today was riddled with long passes and no clear pattern of play to give Sudanese opponents something to think about.

The options for our midfield was very obvious and easy to read. Whenever our long balls were cut out by the Sudanese, their immediate reaction was to attempt to counter-attack through quick balls to their wide men as they noticed the Black Stars defensive shape was unstable.

The Black Stars paid the ultimate price in conceding through such means. Coach C. K would have benefited from a 3 man midfield (2 attacking and 1 sitting) to ensure the back 4 has an extra man tracking back and ultimately preventing Mohamed Abdel Rahman from getting onto that cross from the Sudanese right attacking outlet.

Reverting to a 3 Man midfield would have definitely offered a better platform for the Black Stars in their attempt to snatch the late win.

The introduction of John Antwi was ill-timed. Coach C. K should have introduced the striker at the start of the second half to have him warm up to the game quicker and be a better outlet for the team.

Some may say the Sudanese did not deserve anything from the game but all indications over the last 5 days, it seems they deserved more than the three points they won today. Coach CK has it all to do with a big performance when the Stars face Bafana Bafana in March.

A better performance and show of tactical superiority will convince most. On account of the team’s performance over the last 4 matches, Coach CK needed this reality check.

He has to pick his best available players and play the best tactic to suit them.