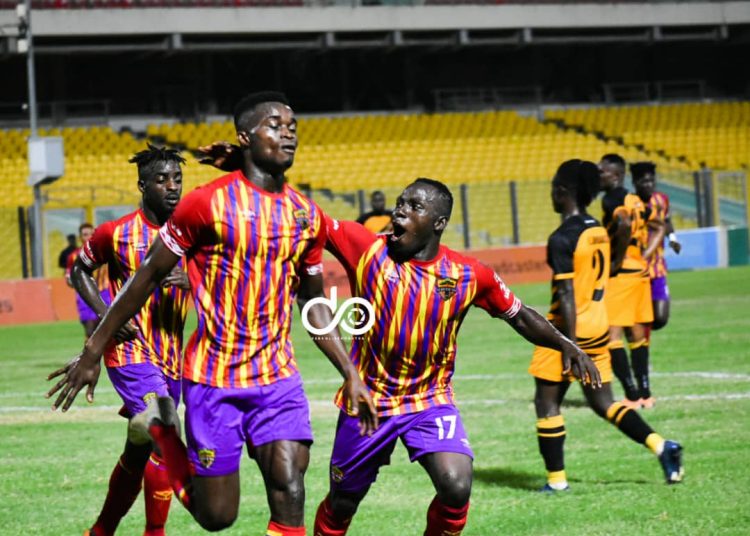 Ashantigold came from behind twice to snatch a 2-2 draw in Accra against Hearts of Oak to deny the Phobians all three points in their opening game of the season.

Obeng Junior’s brace for Hearts of Oak was matched by a brace from Hans Kwofie, whose 90th minute header denied Hearts of Oak an opening victory.

Ashgold began the match the more threatening side as Yaw Annor saw his attempt saved in the 9th minute by Hearts of Oak goalkeeper Richard Attah.

Winger Daniel Afriyie had his header saved by Ashgold Goalkeeper Robert Dabuo as hearts looked to find their rhythm in the game.

Both sides had their chances in the first half but it was Kojo Obeng Junior, who found the net for Hearts of Oak in the 32nd minute, assisted by Patrick Razak.
The home team went into half-time with the advantage.

The second half begun just like the first, with Ashgold pressing for the equalizer and their efforts paid off as Hans Kwofie found the net for the visitors in the 56th minute.

Hearts of Oak took the lead again in the 80th minute through Obeng Junior, off a perfect beautiful assist from Patrick Razak.

But Ashgold would not go down without a fight.

The away side kept pressing and eventually found a last minute equaliser through Hans Kwofie, who nodded in a pinpoint cross from Roland Amouzou.

Ashantigold have now drawn both of their opening games 2-2 following an opening day draw at home to Karela United.

The miners will now turn their attention to the CAF Confederation Cup where they will take on Burkinabe side FC Salitas in the preliminary round on Sunday.

Hearts meanwhile will next face Inter Allies in the Ghana Premier League.