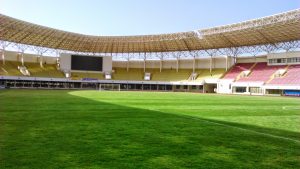 The Ghana Football Association, have asked Kumasi Asante Kotoko to provide concrete reasons as to why they should be allowed to play the remainder of the Ghana Premier League season home games at the Aliu Mahama Sports Stadium in Tamale.

The Porcupine Warriors last month wrote to the GFA requesting to change their home venue from the Accra Sports Stadium, to the Aliu Mahama Sports Stadium in Tamale for the remainder of the 2020/2021 Ghana Premier League season.

According to the club, there is a lot of pressure and congestion due to the number of clubs who play their home games at the Accra Sports Stadium, hence their request for a change in venues.

The GFA rejected Kotoko’s request and asked them to provide further explanation for their sudden change of mind.

The Communications Manager of Kumasi Asante Kotoko, Moses Antwi Benefo said the club will revert to the GFA at the right time.

“The communique we had from the FA today is that, the information they had from the club licensing department, indicates that there was no negative effect to the Accra facility,” he told Citi FM in an interview.

“And if we still maintain that we want to move to the Aliu Mahama Sports Stadium, we should give them reason why we want to embark on that journey.

“We would respond to that letter in due time.” He concluded.

Kotoko have so far only played one home game in the 2020/2021 season, drawing 1-1 with Techiman Eleven Wonders and will host Mauritanian side FC Nouadibhou in the second-leg of the CAF Champions League preliminary qualifying round match on Saturday.