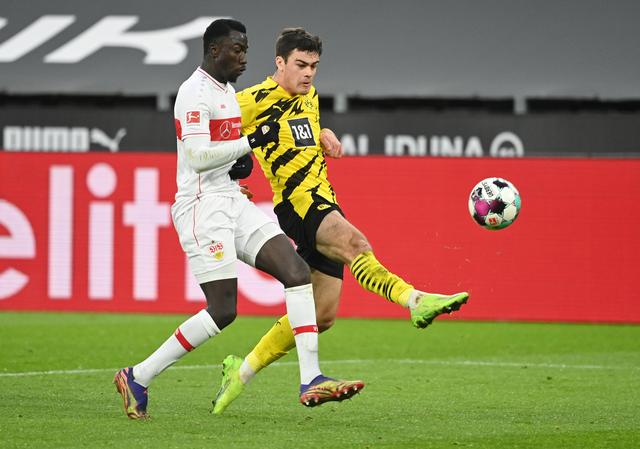 Borussia Dortmund lost further ground in the Bundesliga title race as they suffered a heavy home defeat by promoted side Stuttgart on Saturday.

Silas Wamangituka put Stuttgart ahead with a 26th-minute penalty, after Emre Can had brought down Mateo Klimowicz.

Defeat leaves Lucien Favre’s side fifth and five points behind leaders Bayern Munich, who were held to a draw by Union Berlin later in the day.

Dortmund, who finished second last season, have won only one of their past five in the German top flight – with this their third defeat in that run.

Favre’s side came from behind to beat Zenit on Tuesday and secure their place in the Champions League last 16 as Group F winners, but in the absence of injured top scorer Erling Braut Haaland they have taken one point from their past three league games.

Reyna’s sublime equaliser looked to have set Dortmund up for a much-improved second half, but Wamangituka’s second and quickfire goals from Philipp Forster and Tanguy Coulibaly established an unassailable lead.

Reyna had a late consolation ruled out for offside, before Gonzalez raced clear in stoppage time to seal a memorable victory for Stuttgart, who move one place and two points behind Dortmund in the table.