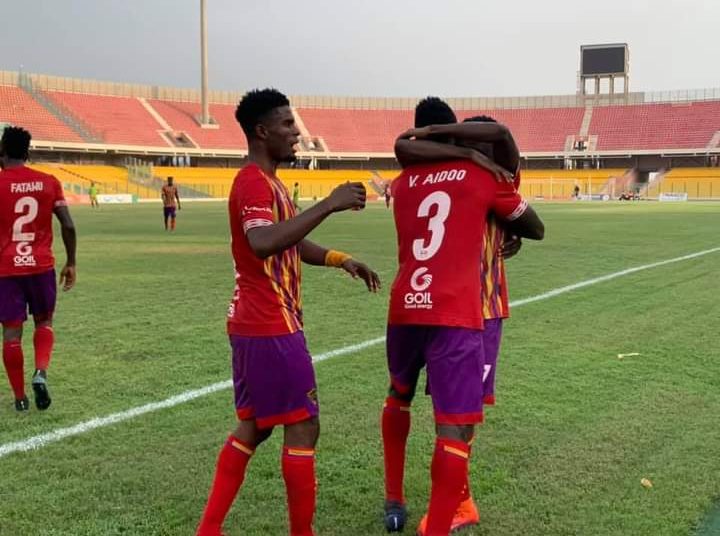 The Academy boys took a four-nil lead into half-time courtesy of  three goals from Daniel Lomotey and one from Godwin Agbevor.

Medeama pulled one back in the 61st minute through a penalty which Abass Mohammed converted with ease.

Rashid Nortey scored twice in the 67th and 70th minutes to put the visitors a goal away from leveling with the hosts but Lomotey found the back of the net again in the 84th to give WAFA a two-goal cushion.

Medeama would not go down easily as Justice Blay scored late in the 87th minute to make it 5-4 but the home team managed to hold on to grab all three points.

AshantiGold SC returned to winning ways on Sunday as they came from behind to beat Berekum Chelsea 2-1 at the Len Clay Stadium.

Augustine Henneh put the visitors ahead just eight minutes into the game before Appiah McCarthy put the hosts on level terms with a with a brilliant strike from the edge of the box in the 22nd minute.

Hans Kwofie netted his 3rd goal of the campaign in the 39th minute to secure all three points for the Miners.

Aduana Stars came from a goal down to defeat Great Olympics 2-1 on Sunday.

Samuel Ashie-Quaye put the visitors in the lead in the 51st minute after a goalless first- half but Flavien Jean Kongaza equalised for Aduana just a few minutes later in the 56th minute.

Yahaya Mohammed scored from the spot in the 78th minute to seal the deal for the home side.

Elsewhere at the Carl Reindorf park, Liberty Professionals handed Legon Cities yet another defeat in the Ghana Premier League with a 1-0 win.

Bashir Hayford’s men played majority of the game with just 10 men after Yusif Fadili picked up a red card in the 25th minute.

Legon Cities managed to keep Liberty at bay till the 79th minute when the home side was awarded a penalty, which Abraham Wayo converted to hand all three points to David Ocloo’s men.

The win moves Liberty up to 7th on the table while Legon Cities remain bottom with just three points from seven games.

Inter Allies managed to secure a 1-0 win over Techiman Eleven Wonders at the Accra Sports Stadium.

This win is the second for Allies this season while the loss marks a second away defeat for Ignatius Osei-Fosu’s men.

The game seemed to be heading to a goalless draw before Alex Aso found the back of the net in the 56th minute.

Karela United fought from a goal down to record a 3-1 win over Elmina Sharks.

Sharks took the lead through experienced midfielder James Bissue, after driving in a ferocious strike from a free-kick in the 15th minute.

The home side leveled ten minutes later through Richard Berko in the 25th minute.

Kwame Boateng put Karela in the lead for the first time in the game with just six minutes of regular time left before Taylor Diawisie converted a penalty in added time to hand all three points to the home side.

In Saturday’s only game,

Hearts of Oak brought an end to Bechem United’s unbeaten run in the Ghana Premier League in grand style at Accra Sports Stadium on Saturday with an impressive 6-1 win.

Abdul Manaf Umar scored the opening goal of the game for the home side in the 52nd minute before Victor Aidoo came off the bench and scored twice to give the Phobians a 3-0 lead.

Frederick Ansah Botchway scored from the spot to give Hearts a 4-0 lead after Daniel Afriyie was brought down in the box.

The away side pulled one back through Prince Adu Kwabena in the 86th minute, before Abdul Lawali and Benjamin Afutu Kotey each scored to make it six for hearts.

King Faisal and Dreams FC shared the spoils in a 1-1 draw in Techiman.

Kwadwo Frimpong put the home side in front in the first half before a deflected shot ensured both teams shared the spoils at the Nana Ameyaw Park.

King Faisal ended the game with 10 men after goalkeeper Kaisan Yuisu was shown the exit by referee Mohammed Misba.

The game between Ebusua Dwarfs and Kumasi Asante Kotoko has been postponed due to the Kumasi based club’s involvement in the CAF Champions league.