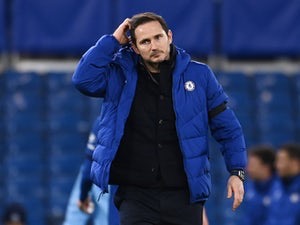 Chelsea are reportedly considering relieving Frank Lampard of his duties as head coach.

The Blues were mentioned as possible contenders for the Premier League title earlier this season, but a disappointing run of form has seen them lose four of their last seven matches in all competitions.

The capital giants have picked up just one victory from their last six league outings, meanwhile, to slip down to eighth position in the table, seven points off the summit.

According to The Athletic, Lampard’s job as manager ‘is under serious threat’, with the Blues considering a change following Sunday’s 3-1 home defeat to Manchester City.

The report claims that Chelsea chiefs are already looking at possible replacements for the club’s former midfielder, who spent big on German pair Timo Werner and Kai Havertz last summer.

The 42-year-old has been in charge at Stamford Bridge since July 2019, winning 41, drawing 17 and losing 22 of his 80 competitive matches at the helm.

The Blues are next in action against League Two side Morecambe in the FA Cup on January 10.