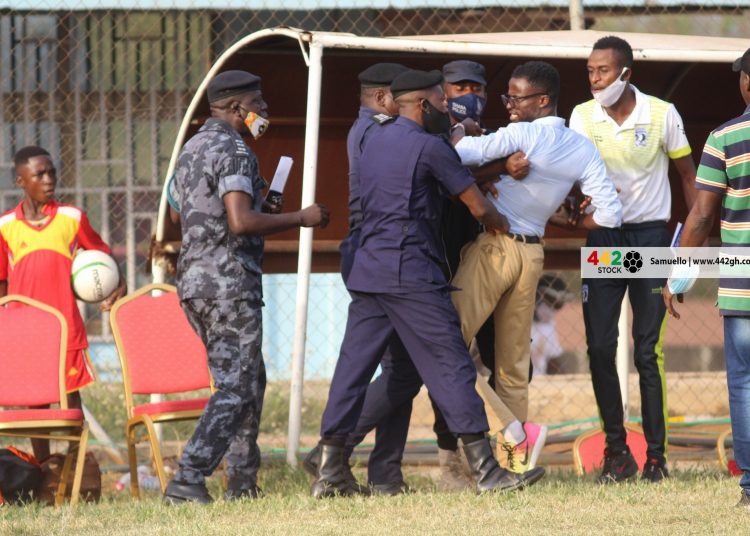 Head coach of Techiman Eleven Wonders, Ignatius Osei Fosu, has labelled Ghana police personnel who manhandled him during his side’s 3-1 defeat to Bechem United as ‘unprofessional’ and accused them of supporting the home team.

Bechem came from behind to beat Wonders 3-1 to go top of the Ghana Premier League on Friday night.

But the game was marred by ugly scenes that saw police intervening to restrain Osei Fosu after he confronted the match officials for what he described as ‘normal disagreement between coaches and referees’.

Public commentary on the incident suggested Osei Fosu attempted to physically assault the assistant referee for insulting his mother and had to be stopped by 4 police officers.

But in an interview with Citi Sports’ Fentuo Tahiru Fentuo on Sports Panorama on Friday night, the young gaffer said the police behaved unprofessionally towards him because of their affiliations with Bechem United.

“It was normal banter between a referee and a coach. It was a normal disagreement and this happens all over the world.

“But for me, what the police did was just unprofessional. A lot of the police men we take to our stadiums to provide security, go there to support the home team.

“And once the game is not panning out in their favor, they get agitated and I think the police men were agitated by my confrontations of the referee.

“Exchanging words with the referee is normal banter and the police didn’t need to manhandle me the way they did,” he concluded.

Osei Fosu also suggested he would not be taking any further action against the action of the police after consulting with many key stakeholders in the football fraternity.