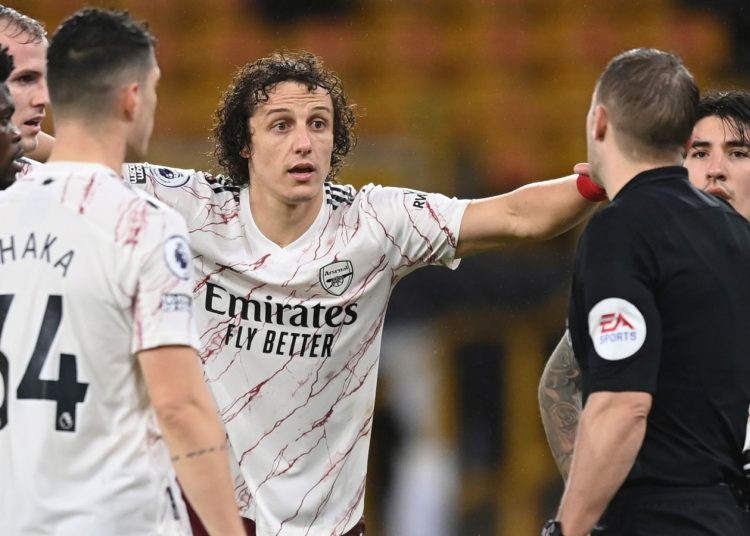 Arsenal’s appeal against the decision to send off David Luiz during Tuesday’s defeat at Wolves has been dismissed by the English FA.

Luiz was sent off for the third time in his Arsenal career during the 2-1 loss on Tuesday after being adjudged to have committed a last-man foul in first-half stoppage-time on Wolves striker Jose by referee Craig Pawson.

Contact appeared to be minimal, but the decision was upheld by VAR Jon Moss.

Gunners boss Mikel Arteta had been “very hopeful” of overturning the decision, adding that putting the blame on Luiz for the incident “isn’t fair”.

Arsenal have accepted the FA’s decision but say they are “disappointed that our appeal has been unsuccessful”.

Meanwhile, Southampton will have defender Jan Bednarek available for Saturday’s trip to Newcastle after his dismissal against Manchester United was overturned.

Bednarek was sent off for a last-man foul on Anthony Martial during the Saints’ 9-0 loss at Old Trafford.

Regulation and Discipline update from The @FA. pic.twitter.com/c1zVIZFOaH

Referee Mike Dean initially awarded a spot-kick but only checked for a possible red card offence on the pitchside monitor when notified by video assistant referee (VAR) Graham Scott.

Rules state if last-man defenders bring down attackers without attempting to play the ball, they will be sent off.

Dean opted to show Bednarek a red, though the centre-back did not agree with the decision and could be heard saying “Martial said it’s not a foul” before walking down the tunnel.