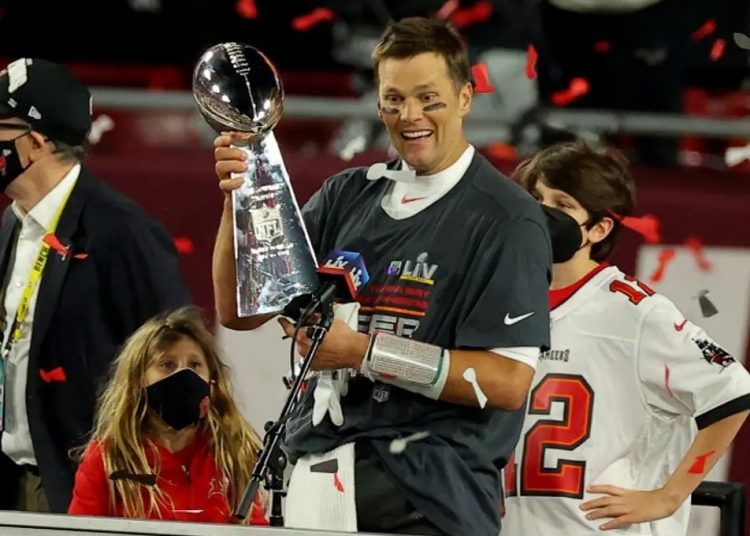 0
SHARES
6
VIEWS
Share on FacebookShare on TwitterShare via Whatsapp

Tom Brady steered the Tampa Bay Buccaneers to a comfortable 31-9 victory over the Kansas City Chiefs to extend his record for Super Bowl wins to seven.

In his first season after a glittering 20-year spell with the New England Patriots, the evergreen quarterback helped Tampa Bay become the first team to play a Super Bowl in their own stadium.

And despite facing Kansas City and their dynamic young quarterback Patrick Mahomes, who came in as favourites, Brady threw three touchdown passes to prevent the Chiefs becoming the first back-to-back NFL champions since Brady and the Patriots in the 2004 season.

At 43 years and 188 days, Brady became the oldest player to play in the biggest game in US sport, extending his record for Super Bowl appearances to 10 and joining Peyton Manning as the only quarterbacks to win Super Bowls with two different teams.

Already widely considered the greatest NFL player of all time, Brady decided to leave New England in the off-season for a new challenge and was lured to Tampa Bay, whose only previous Super Bowl win came in the 2002 season.

He reportedly urged the Bucs to bring in former Patriots team-mates Rob Gronkowski and Antonio Brown, as well as Leonard Fournette, and the trio shared Tampa Bay’s four touchdowns as they eased home in Super Bowl 55 after leading 21-6 at half-time.

While the Chiefs came into the post-season as the top seed in the AFC Conference, Tampa Bay were the NFC’s fifth seed and became the first wildcard team to win a Super Bowl since the Green Bay Packers 10 years ago after a remarkable play-off run.

After losing to the Chiefs in week 12, the Bucs finished the regular season with four wins before beating three division winners – all on the road – to reach the title decider for just the second time.

Remarkably, Brady now has more Super Bowl wins than any single NFL franchise and was named the big game’s Most Valuable Player for a record-extending fifth time.