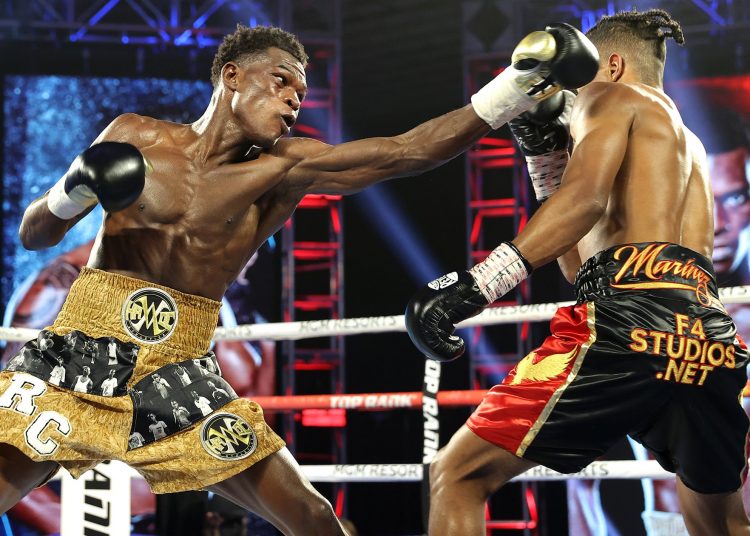 Head trainer for Ghanaian lightweight boxer, Richard Commey, has stated that he would have loved to have seen a lot more output from Commey as he defeated Jackson Marinez In Las Vegas on Saturday.

Commey won the bout, his first since his loss to Teofimo Lopez in December 2019, via a very strong 6th round knockout of his opponent.

The victory brought smiles to Commey who has had to find a new way back to the top of the divison after he lost the IBF Lightweight title to Lopez in 2019.

However, his trainer, Andre Rozier, told FightHype’s YouTube channel after the bout that there were aspects of Commey’s performance that could have been better on the night.

“Commey has a good right hand and I expected to see him use a lot more of that. He and Teofimo Lopez both have those right hands and when you get caught by the, you will be in trouble.

I thought Richard was a bit too tight for me. I wanted to him follow through a bit more with the left upper cut because I knew that Jackson loved to bend his knees a lot.

Before the bout, Teofimo Lopez was in Commey’s dressing room to encourage and support him and he and his father were both ringside during the bout, Lopez went further to give Commey a few tips as the bout went on and Rozier, in his post-bout interview, referred to them as his “assistant trainers” and spoke on the relationship between Commey and Lopez.

“These two gentlemen have a special friendship and you could see the love that they have for each other.

In the dressing room, I even thought they had to pry them apart because they sharing lots of hugs. It is all about the love for boxing and it is business.”

What’s next for Commey?

No one knows for now but his victory will give him the confidence to seek out other opponents in the division and already, pundits and observers are asking if he will be going after the likes of Masayoshi Takatani, Devin Haney or Ryan Garcia` as he tries to get back into the conversation around winning the lightweight title once again.