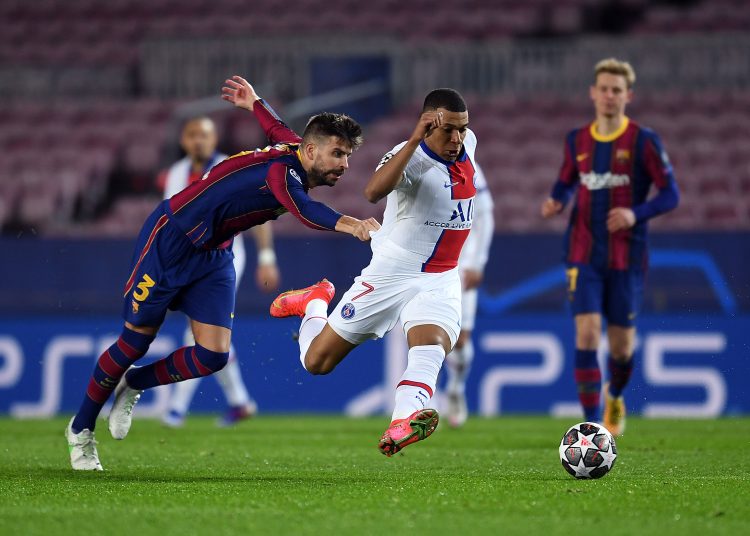 In a night where everything was at stake, it was Kylian Mbappé and Paris Saint-Germain that showed up for the party in Camp Nou as the French champions defeated Barcelona 4-1 on Tuesday night in the Champions league round of 16 first leg.

It was a night full of positives for the Ligue 1 side, but one Lionel Messi, Barcelona and especially Gerard Piqué will like to quickly forget.

In his first-ever appearance against the Blaugrana, the French sensation dropped an absolute masterclass and scored a hat-trick in a 4-1 Champions League first leg trouncing at the Nou Camp.

The 22-year-old looked very deadly at every attack and was absolutely unplayable even without Neymar and Angel Di Maria, he gave Barça’s defence the run-around.
One of the significant moments of the game was when Mbappé took Gerard Piqué for “Need For Speed” race.
Poor old Pique was making his first appearance since suffering a ligament injury in November, and he was roasted by the former Monaco man during his time on the pitch, being subject to all manner of trickery and pace by the French youngster.
It was with this that some fans started trolling the one-time World Cup winner with Spain.

Woman with the issue of blood: pic.twitter.com/vk9VasnaSn

.. ‘if only I can touch the hem of his garment’… pic.twitter.com/WdkMqW53nj

After the game, Gerard Piqué would have wished he stayed injured for a little while and rather not have to face the electric French footballer.