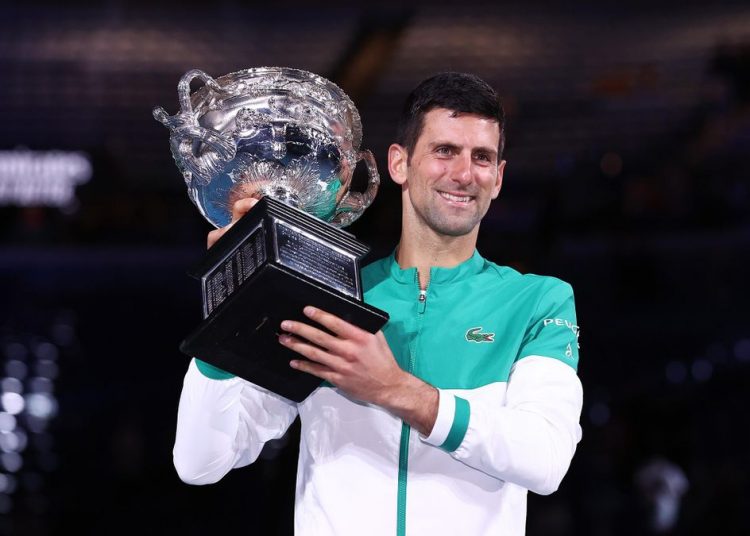 Novak Djokovic remains the king of Melbourne Park after sealing his third consecutive Australian Open title and ninth overall as the world No 1 outclassed Daniil Medvedev 7-5 6-2 6-2 in Melbourne on Sunday.

Victory earned Djokovic an 18th career Grand Slam title to pull him to within two of Roger Federer and Rafael Nadal at the top of the all-time standings.

In an astonishing dominance of the men’s game, Djokovic, Nadal and Federer have now won 15 of the last 16 Grand Slam titles despite all being well into their 30s, with the exception being Dominic Thiem at last year’s US Open.

Djokovic held aloft the Norman Brookes Challenge Cup and said: “It has been a rollercoaster ride for me, especially in the last couple of weeks. (Physio) Uli (Badio), special thanks to you. You’ve dedicated so much time to making sure I’m able to play. I’m eternally grateful. Thank you guys, I love you.

“There are a lot of mixed feelings about what has happened in the last month or so with tennis players coming to Australia but, I think, when we draw a line in the end, it was a successful tournament.

“It wasn’t easy, it was very challenging on many different levels but I think (organisers) should be proud of themselves for what they have put together and allowed us to come to Australia and be standing here.

Djokovic declared himself back to full fitness following the abdominal injury he suffered in the third round against Taylor Fritz and battling through matches against Milos Raonic and Alexander Zverev.

He declared himself back in peak condition after beating Aslan Karatsev in straight sets in the semi-finals, which proved to be bad news for Medvedev.

Playing in his 28th major final, Djokovic came flying out of the blocks, making a perfect start to surge into a 3-0 lead.

Medvedev, who reached his first Grand Slam final at the US Open in 2019, came into the final high on confidence having won three titles in a 20-match unbeaten streak.

Having already beaten Djokovic in straight sets at the ATP Finals last November, the Russian responded after winning a 28-shot rally to find a way to break back and level up at 3-3.

But it was Djokovic who eventually drew first blood by edging a high-quality set after the fourth seed dropped serve again in the 12th game to tip the scales in the Serbian’s favour.

Medvedev, who has many of the same traits as Djokovic in terms of his defensive qualities and relentless consistency from the back of the court, broke immediately at the start of the second.

But the 33-year-old responded by winning five out of the next six games as Medvedev began to unravel, venting his growing frustration on his racket.

Another break in the next game gave Djokovic the set 6-2 and a comfortable lead as he looked to tighten his vice-like grip on the Norman Brooks Challenge Cup for a ninth time.

The 25-year-old Russian had come from two sets down before losing to Nadal in the final of the US Open in 2019 on his Grand Slam debut, but his attempts for a repeat were quickly extinguished by a quite magnificent display by his opponent.

A masterly Djokovic found open water before sealing victory with an overhead to continue his domination at Melbourne Park.

With his ninth title, the 33-year-old becomes only the second man after Nadal in Paris to win a major more than eight times.