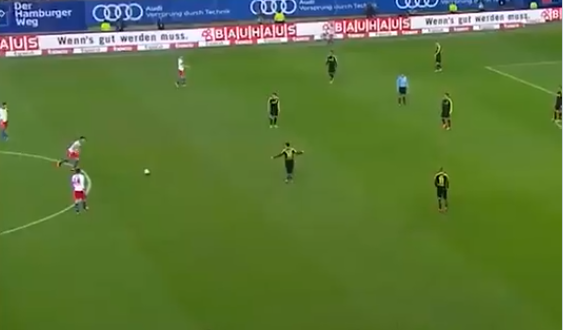 Hakan Calhanoglu may not be one of the world’s most popular football names but it’s doubtful the goal he scored against Borussia Dortmund will ever be forgotten.

Struggling Hamburg were leading Dortmund 2-0 seven years ago today when they won a free-kick just after the halfway line.

With the away side’s players coming to terms with the impending loss, they barely acknowledged the free-kick because what could come of it when it was 45 yards away from goal.

Calhanoglu took aim and fired a missile which flew into the air and dropped into the back of goalkeeper Roman Weidenfeller’s net.

Despite losing 3-0, Dortmund’s manager at the time, Jurgen Klopp, couldn’t help breaking out a smile.

Here’s what some people had to say about it

This has to be the best freekick I’ve ever seen. The ball just kept moving in the air. I really feel for the goalkeeper

If there’s one thing I love about Kloop is that the man appreciates class, this was his same reaction when minamino scored against Liverpool 🙌🏿🙌🏿

Insane strike. From 45 yards Weidenfeller should probably do better but it’ll be harsh to blame him

Hakan Calhanoglu’s stunning 45-yard free kick against Dortmund was so good, all Jurgen Klopp could do was smile 🚀