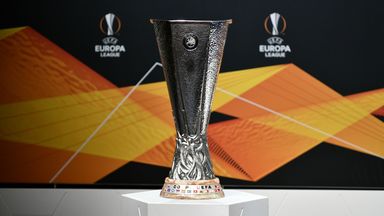 Manchester United will face AC Milan in the last-16 of the Europa League, while Arsenal have been drawn against Olympiakos.

United will host the first leg against Milan, which will see their former striker Zlatan Ibrahimovic return to Old Trafford.

Arsenal will travel to Greece in the first leg of their tie with Olympiakos, who knocked them out of the Europa League in the round of 32 last season.

The Greek champions play their home matches at the Karaiskakis Stadium, the venue for Arsenal’s dramatic victory over Benfica in the last 32 of the competition on Thursday.

The Gunners’ north London rivals Tottenham will face Dinamo Zagreb, who progressed to the last 32 after beating Russian side Krasnodar.

Spurs won the UEFA Cup – the previous incarnation of the Europa League – in 1972 and 1984, while their manager Jose Mourinho lifted the trophy with Porto in 2003 and Manchester United in 2017.

All four British teams left in the competition were kept apart after Rangers were drawn to play Slavia Prague, who shocked Leicester in the previous round.

Elsewhere in the draw, former Arsenal boss Unai Emery – the most successful manager in the history of the Europa League – will see his current side Villarreal take on Dynamo Kiev.

Granada will continue their impressive campaign against Norwegian side Molde. The Spanish club are enjoying their first season in European competition and stunned Italian giants Napoli in the previous round.

The first legs of the last-16 ties will take place on March 11, with the return legs a week later.

The quarter-final and semi-final draws will then be held on March 19 in Nyon, Switzerland.