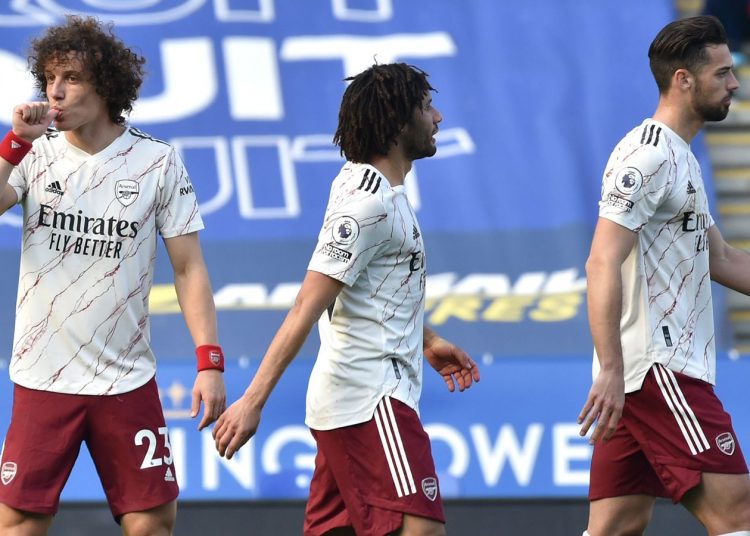 Leicester’s increasingly forlorn-looking pursuit of Premier League leaders Manchester City suffered a big blow as Arsenal came from behind to claim an impressive victory at the King Power Stadium.

On a miserable afternoon at the end of a dire week for the Foxes, they also had influential winger Harvey Barnes carried off on a stretcher with his leg in a brace to add to their already considerable injury problems.

Things had started well for the hosts, who were given an early tonic for their midweek Europa League exit as Youri Tielemens was allowed to run unchecked down the right before firing a low shot into the far corner with just six minutes played.

Arsenal refused to be adversely affected, though, and took control of the game with impressive attacking intent and far greater fluency than Leicester.

David Luiz brought them level, finding space in the box to steer a header in from Willian’s free-kick.

Alexandre Lacazette then put them ahead after the video assistant referee (VAR) judged that Wilfred Ndidi had blocked Nicolas Pepe’s shot in the box with an outstretched arm.

It was second time lucky for the Gunners, who had earlier had a penalty awarded on the pitch but then downgraded to a free-kick after VAR decided the offending tackle on Pepe had taken place just outside the area.

Ivory Coast forward Pepe got in on the act himself, tapping into a largely unguarded net after Willian’s pass had deflected his way.