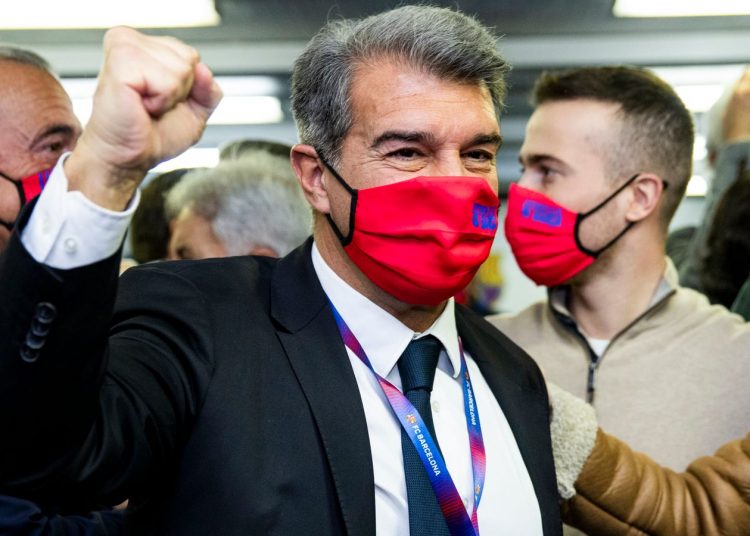 Joan Laporta has been named as Barcelona president for a second time after winning the club’s election.

Laporta, whose central pledge was to keep Lionel Messi at the club, won more than 54% of the vote.

The 58-year-old, who oversaw the appointment of Pep Guardiola as head coach in his previous spell at the club between 2003-2010, succeeds Josep Maria Bartomeu who resigned in October.

Victor Font was second with 30% of the vote, with Toni Freixa a distant third.

Barcelona said 55,611 of its 109,531 eligible members voted in the election, which was postponed from January because of coronavirus restrictions in Catalonia.

Messi also emerged as a world star during that period and was among several current Barca players to vote in the election.

Amid champagne celebrations on Sunday evening, Laporta shouted: “Now let’s go to Paris and see if we can make another ‘remontada’ [comeback] happen!

“Seeing Leo [Messi] go to vote, the best player in the world, voting with his son, for me, this shows what we’ve said all along, that Leo loves Barca, that we are all a big family. Hopefully that helps him to stay which is what we all want.”

Barcelona face Paris Saint-Germain on Wednesday in the Champions League last 16, with a 4-1 deficit to make up from the opening leg.

Longer term, Laporta’s task will be to rebuild a club in crisis, with crippling debts exacerbated by the pandemic and Messi considering leaving for free when his contract expires this summer.