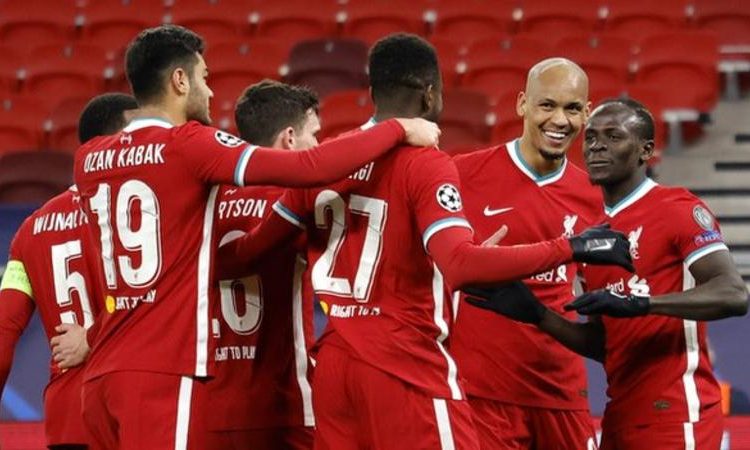 Fabinho is “one of the best in the world at number six”, Jurgen Klopp said after the Brazilian helped Liverpool beat RB Leipzig to reach the Champions League quarter-finals.

The 27-year-old midfielder has had to fill in at centre-back for large parts of this season because of injuries to Virgil van Dijk and Joe Gomez, while also suffering from a number of fitness problems of his own.

But restored to his preferred position in the centre of the Reds midfield, he excelled in the last-16 second-leg win over Leipzig, secured through second-half goals from Mohamed Salah and Sadio Mane.

It keeps alive the club’s hopes of a second European title in three seasons at the end of a campaign where their title defence has fallen apart following a run of recent home defeats.

“The performance and the level we played tonight was really good and necessary,” Liverpool manager Klopp said. “We did really well. Defending-wise [it] was really good. [The] front three worked well together – but missed a couple of chances in the first half.

On Fabinho, he said: “We have to see what solutions we can find for the next games – but number six is his position.

“It was our hope to keep him there for the season. He is one of the best in the world in that position, that is clear – not only defending-wise but creating as well. He is so important to us.”

For 70 minutes in Budapest’s Puskas Arena, Liverpool were extremely wasteful in front of goal, but sealed the tie when Salah cut inside and finished low shortly after Leipzig substitute Alexander Sorloth had struck the bar with a header.

Mane made absolutely sure with a neat finish from Divock Origi’s superb cross.

Klopp’s side will find out their last-eight opponents when the draw is made on Friday, 19 March.

“The only reason you play in the Champions League is to win but we are not silly,” Klopp continued on BBC Radio 5 live.

“We will wait and see what is possible and we wait for the draw. It will be tough whoever we get.

“We are [dangerous opponents] but it is nothing really. I don’t want to create headlines about our hopes.

“We didn’t have momentum in the Premier League but we have games to get that back and that would help us in the Champions League.”