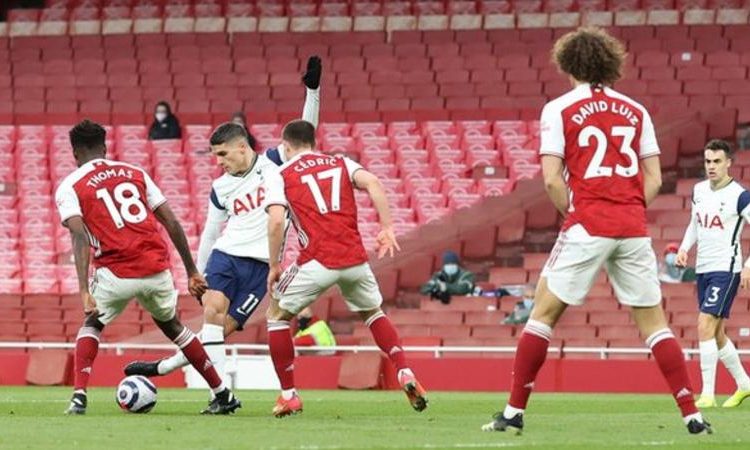 Arsenal came from behind to secure a fully deserved north London derby win and inflict damage on Tottenham’s hopes of a place in the Premier League’s top four.

The Gunners were vastly superior until a Spurs rally in the closing stages but fell behind to a piece of genius from Erik Lamela – on for the injured Son Heung-Min – when he curved a magnificent rabona finish beyond Arsenal keeper Bernd Leno in the 33rd minute.

Arsenal, who had seen Emile Smith Rowe’s long-range shot smack against the bar, then suffered more ill-luck when Cedric Soares hit the post, but were level on the stroke of half-time when Martin Odegaard’s effort was deflected out of the reach of Spurs keeper Hugo Lloris.

Mikel Arteta’s side continued to dominate a largely dreadful Spurs and took the lead from the penalty spot after 64 minutes when Alexandre Lacazette missed his kick but was fouled by Davinson Sanchez.

Lacazette recovered to send Lloris the wrong way for his 12th goal of the season.

Spurs’ day got worse when Lamela was sent off for a second yellow card, shown by referee Michael Oliver for a hand-off into the face of Kieran Tierney with 14 minutes left.

But they almost snatched a point in the closing moments when Harry Kane’s free-kick bounced off the post, with Arsenal defender Gabriel heading Sanchez’s goal-bound shot off the line from the rebound.

Arsenal, who dropped captain Pierre-Emerick Aubameyang for the game for disciplinary reasons, stay in 10th place but Spurs are now six points adrift of Chelsea in fourth, although with a game in hand.