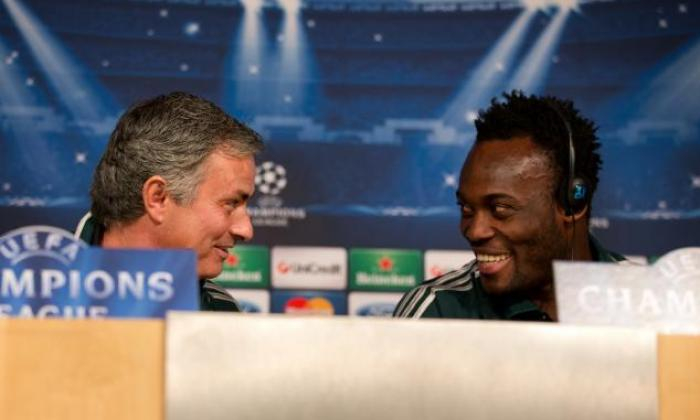 Michael Essien has revealed the management lessons he learned from Jose Mourinho as he takes the first steps into his own coaching career at FC Nordsjaelland.

Mourinho was the man who lured Essien to English football from Lyon back in 2005, and the pair went on to enjoy great success together at Stamford Bridge before also linking up at Real Madrid.

Essien says he learned a great deal about management while playing under Mourinho, and is hoping to transmit the same winning mentality to the Nordsjaelland squad after taking up his first coaching role with the Danish club.

“I have played under so many coaches and every one is different. I would take Mourinho as an example – I was very much connected with him,” the former Chelsea star told The Football Ramble podcast.

“He’s a winner, he gives you tactical details and makes sure it’s very clear so when you’re on the pitch you know what to do.

“It’s one of the things I am going to carry with me and hopefully I can transmit to the boys if one day I become a manager.”

Asked if he had always planned to venture into coaching after hanging up his boots, Essien responded: “I didn’t think I would make the transition. When I was playing I always said ‘no I don’t want to be a coach’ but when you love the game so much you always try to be in the game.

“So two or three years ago I said I am coming toward the end of my career and I want to learn about the coaching side of the game and it will give me the opportunity to be on the pitch and to be around the players.

“Actually when I started doing it, it was something I wanted to do. The whole project here is very good for my transition into the coaching side of the game.”

Essien made the transition from Ligue 1 to the Premier League seamlessly upon his arrival at Chelsea, playing a key role in their successful title defence in his first season at the club.

He continued to feature prominently in Mourinho’s set-up in 2006-07 and, although the Blues surrendered the top-flight crown to Manchester United, they were still able to pick up FA Cup and League Cup honours.

Mourinho was sacked in the early stages of the following campaign, and went on to spend two years with Italian giants Inter before taking the top job at Madrid in 2010.

During the current Tottenham manager’s final season at Santiago Bernabeu, he signed Essien on loan from Chelsea, and the duo reunited briefly again in west London at the start of the 2013-14 campaign before the midfielder joined AC Milan.

Essien spent nine years on Chelsea’s books in total, and won six more trophies on top of the three he won under Mourinho, including another Premier League title and the Champions League, while establishing himself as a club legend.

The former Ghana international made 256 appearances across all competitions for the Blues, scoring 25 goals and laying on 18 assists.