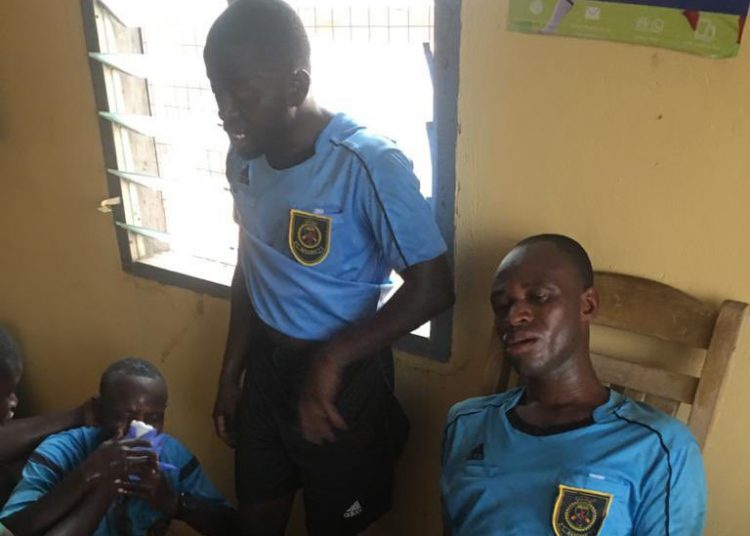 Irate fans of Division One League side, Mighty Royals have mercilessly beaten up Referee Niatire Suntuo Aziz and his assistants Suleman Mohammed, Yakubu Abdul Rahman as well as the fourth referee Hasim Yakubu.

Just look at this nonsense. This almost looks like they are going to lynch him. All because of what?? Football is not a life and death situation. Why can’t people understand that? Does beating the referee give you 3 points?? pic.twitter.com/2LSORL3X8E

According to reports, fans of the home side beat up the match officials after the game had ended in a 0-0 draw at the Wamanafo Park in the clash between Mighty Royals and Tano Bofoakwa.

The aggrieved fans of Wamanfo Mighty Royals besieged the main gate to attack the referees for what the fans perceived to be unfair officiating against their club.

However, the Executive Council of the Ghana Football Association (GFA) on February 13, 2021, ordered that all league matches be played behind closed doors beginning from Saturday, February 13, 2021, for the next four weeks which covers all teams at every division.

It is unclear how the fans gained access onto the inner parameter of the pitch to attack the referee.

In a video circulating on social media, one fan could be heard saying in Twi; “We will beat them to death”.

The GFA is yet to release a statement on the hooliganism that transpired.