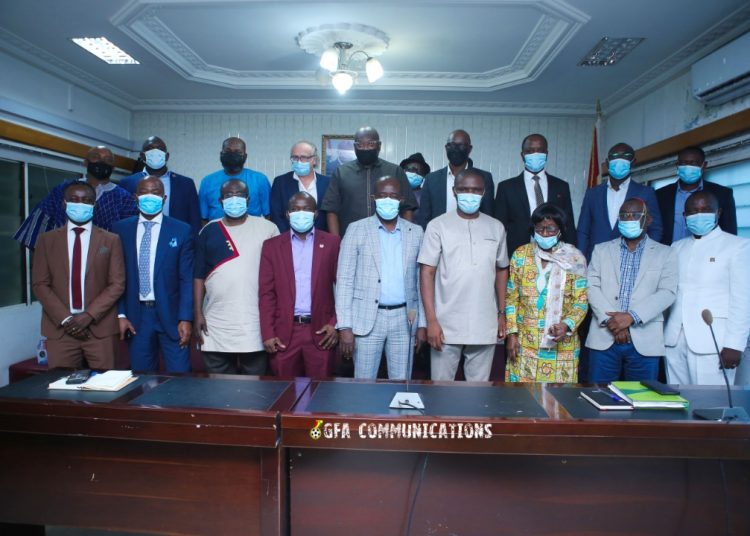 The Minister of Youth and Sports, Mutapha Ussif (Hon.), says that he is ready to join forces with the Ghana Football Association and work together to win the African Nations Cup for the country in his tenure.

The Minister said that winning the African continent’s biggest men’s football competition was part of his 3 biggest objectives at the Ministry and he added that was ready to provide all that was needed to get Ghana to win its 5th AFCON title.

Since 1982, Ghana has not added to its AFCON trophy haul after falling short in the finals in 1992, 2010 and 2015 and for Hon. Ussif, ending the wait was high on his priority list together with giving support to school sports.

He said this on Wednesday when he met the Executive Council of the Ghana FA led by the President, Kurt Okraku.

“I am extremely happy to host you today at my office. There are three things on my heart that I want to achieve as a Sports Minister and with your support, I know we can achieve them.

“My aim is to revive competitions at the school and colleges level and I have already written to the Education Minister to help me set up a technical committee for that purpose.

“As a Minister, I should set objectives and work towards it so the Africa Cup of Nations is my next target. It is the dream of H.E Nana Akufo Addo, President of Ghana to win the AFCON and as a Minister, whatever we require to win the trophy, let’s start working on it now.

The Black Stars will have another attempt at winning the AFCON in 2022 in Cameroon after qualifying to the tournament together with 22 other countries.

The final spot in the 24-team tournament will be determined in June when Benin and Sierra Leone face off.

Sierra Leone will be part of the competition if they beat Benin while Benin need to avoid a defeat to finish second Group L.

Ghana’s path to the trophy will be known by all after the draw is held on June 25, 2021 with the tournament set to be played between January 9 and February 9, 2022.