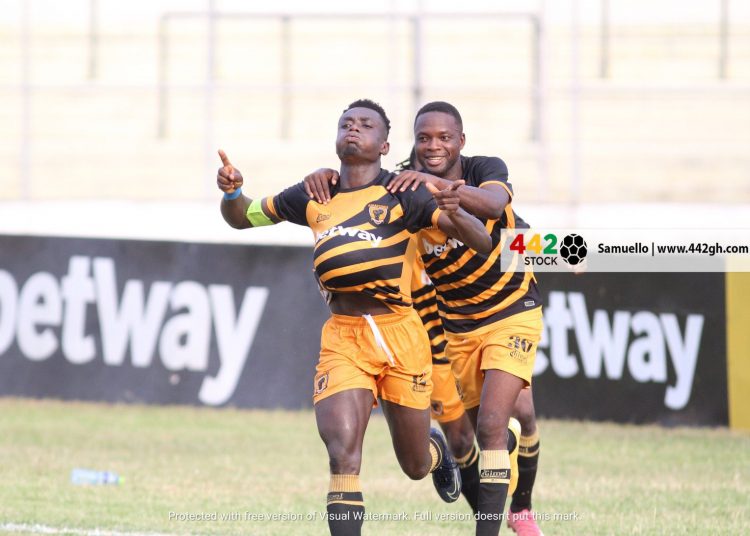 Hearts of Oak missed a first-half penalty and were punished by same at the death in their 2020/21 Ghana Premier League (GPL) match-day 19 visit to AshantiGold Saturday afternoon.

An eventful opening 45 minutes at Len Clay Stadium saw both sides fluff many chances including a penalty kick by the Phobians in the 18th minute.

Winger Patrick Razak earned the penalty after he was caught late by the trailing leg of AshantiGold left-back Samed Mohammed.

But Victor Aidoo – who had converted all his three spot-kicks this campaign – failed this time.

The striker – known for hitting the ball very firm and high – uncharacteristically went for lower power with a placement on the left of Kofi Mensah but the AshantiGold shot-stopper had guessed right to make full grasp of the ball.

From then on, the Miners came in strongly causing a lot of problems for the visitors.

The hour mark saw Hearts giving the ball away in their own half with Yaw Annor charging at them in two minds before releasing to Brooklyn whose shot could not cause any problem for goalkeeper Ben Mensah.

AshantiGold came close again in the 76th minute when Amos Kofi Nkrumah brilliantly went between William Dankyi and Mohammed Alhassan and picked out second-half substitute David Abagna but the midfielder agonizingly blasted the ball wide with his weaker left foot despite having enough space and time to make something out of the opportunity.

The game looked ending in a barren stalemate until the second minute of additional time when the Miners were awarded a controversial penalty. Hearts captain Fatawu Mohammed was adjudged to have handled the ball in the box.

AshantiGold captain Amos Addai stepped up and converted the spot-kick though goalkeeper Ben Mensah had a touch of the ball.

The defeat is a first in three for Hearts coach Samuel Boadu while young French trainer Romain Folz starts his AshantiGold stint right with three points in the bag.

AshantiGold increase their tally to 26 points, four behind Hearts after 19 matches.

SEE HIGHLIGHTS OF THE GAME BELOW: