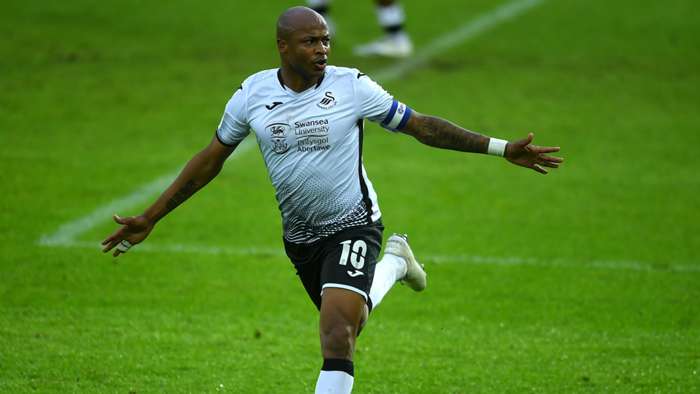 Ghana captain Andre Ayew found his scoring boots after a five-match drought as he netted to help Swansea City to a 3-0 away triumph over Millwall in the Championship on Saturday.

The Ghanaian scored on the stroke of half-time, while Jamal Lowe added two more goals after the break to secure the Jack Army all three points in the matchday 41 fixture away at the Den in London.

The result does not only bring to an end a four-match losing streak but also sends Steve Cooper’s outfit to third on the league table, just below Norwich City and Watford.

With six more rounds of matches to go, Swansea will hope to move from their current Championship playoff position into an automatic Premier League qualification spot, which is only reserved for the top two sides at the end of the season.

Ayew, who last scored against Blackburn Rovers last month, has taken his goal tally to 15 this campaign, equalling his haul during the regular season of last year.

His tally also sets him up as his club’s current top scorer, just as he finished the term last year.

The Ghanaian broke the deadlock in injury time of the first stanza, receiving a pass at the edge of the box from Conor Hourihane, bringing the ball onto his favourite left foot before curling a beautiful ball beyond goalkeeper Bartosz Bialkowski.

After the break, Lowe made it 2-0 after pouncing on a Wayne Routledge through-ball and racing into the box to shoot into the right bottom corner in the 76th minute.

Five minutes to full-time, the first and second scorers combined to find a third goal, Ayew setting up Lowe for a powerful finish from inside the box.

Swansea, who have targeted a return to the Premier League for the first time since 2018, will hope to take three more points on Tuesday when they host Sheffield Wednesday.

Last season, they went close to securing a top-flight return, falling at the play-off stage to Brentford.

According to reports, Ayew will likely leave the Liberty Stadium in the summer should Swansea fail to earn a return to the Premier League, his current deal with the club set to expire at the end of the season.

See Highlights of the goal below: