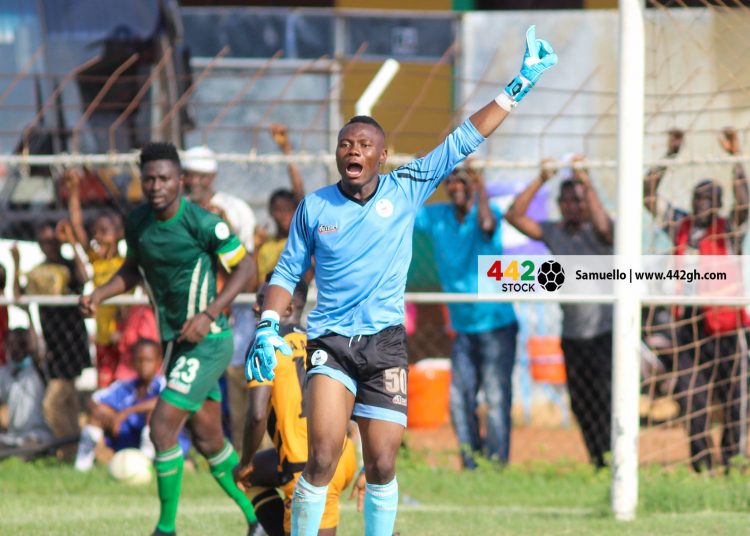 The home team took the lead just three minutes into the first half through forward Hafiz Konkoni, before Dennis Modzaka doubled their lead in the 21st minute.

The visitors would head into the break three goals down after Sampson Adjei Adjetey added Bechem United’s third just 2 minutes to half-time.

Aduana could not find their way back into the game as Konkoni found the back of the net yet again to record his second goal and put the hosts in total control of the game.

At the Golden City Park, Berekum Chelsea came from behind to record a 2-1 win over Ebusua Dwarfs on Sunday.

The result extends their unbeaten run at home to eleven games and moves the team into the top half of the league log ahead of Aduana Stars.

Ebusua Dwarfs were the better side in the first half and deservedly went into the break with the advantage courtesy of Enoch Afram’s goal in the 18th minute.

The home team however improved in the second-half and found the equaliser in the 53rd minute via Stephen Badu.

Kofi Owusu sealed the deal for Berekum Chelsea in the 83rd minute.

Elsewhere at the Obuasi Len Clay Stadium, Liberty Professionals recorded back to back wins for the first time this season with a 1-0 victory over Techiman Eleven Wonders.

The Techiman based club have had to move to the Obuasi stadium after the GFA banned them from using the  Nana Ameyaw Park for defying COVID-19 protocols in their game against Asante Kotoko SC a fortnight ago.

Liberty had the chances in the first half but failed to convert them.

The visitors however got the breakthrough in the 50th minute of the second half through Kwaku Karikari.

Eleven Wonders tried hard to find the equaliser in the dying embers of the game but the game would end in defeat for the home team.

Meanwhile, Medeama recorded a 2-1 victory over Legon Cities in Tarkwa to move to within 2 points of league leaders Asante Kotoko. The win was however overshadowed by midfielder Justice Blay’s injury which is suspected to be a broken ankle.

Prince Opoku Agyemang opened the scoring for the home team in the 23rd minute.

However just before the end of the first-half, Joseph Adjei was shown a red card for a horrible tackle on Justice Blay.

Issaka Mohammed leveled for the visitors in the 80th minute but their joy was short-lived as substitute Kwasi Donsu who replaced Justice Justice Blay scored to restore the lead and secure victory for the home team.

In Dawu, the Ghana Premier League match between Dreams FC and Karela United was abandoned after a downpour during the second-half of the Match week 20 fixture on Sunday at the Theatre of Dreams.

The first-half of the game ended goalless as both teams failed to create enough chances to give them the advantage heading into the break.

The second-half begun with both teams looking to break the deadlock but just five minutes into the action, the referee had to bring an end to the game as the pitch could not handle the intensity of the rain.

The match will be concluded on Monday, 19th April, 2020 and will be continued from the 50 minute where it ended.

In Sunday’s last game, Accra Hearts of Oak recorded a 1-0 win over Inter Allies at the Accra Sports Stadium.

The Phobians were looking to bounce back from their controversial 1-0 loss to Ashantigold in Match Week 19.

Samuel Boadu’s men took the lead in the 26th minute through Daniel Afriyie but it was given as an own goal by Inter Allies captain, Paul Abanga.

The visitors made several attempts to get back into the game and find the equaliser but they were unable to as the hosts held on to grab all three points.

The results leaves Hearts of Oak in 4th place on level terms with Medeama who are in third place also with 33 points.

Inter Allies on the other remain bottom of the league log with 16 points from 20 games.

A last-gasp goal by Samuel Arthur gave Elmina Sharks a 1-0 victory over WAFA SC at the Cape Coast Stadium.

Sharks went into the match hoping to return to winning ways following their 4-0 hammering at hands of Liberty Professionals in Match Week 19.

The match looked to be heading to a goalless draw as both teams failed to find the back of the net after several attempts but Samuel Arthur had other plans as his strike gave the home team the maximum points in the dying embers of the game (90+4).

King Faisal were held to a goalless draw by Ashantigold on Saturday at the Nana Ameyaw Park in Techiman.

Both teams had several opportunities in the game to take the lead but failed to do so.

U-20 goalkeeper Ibrahim Danlad was named man of the match after he helped his side secure the draw by saving several attempts from Ashantigold.

The result leaves King Faisal in 17th place with 19 points from 20 games while Ashantigold find themselves in 8th place.

Kumasi Asante Kotoko held Accra Great Olympics to a goalless draw at the Accra Sports Stadium on Friday in Match Week 20 of the Ghana Premier League.

Both teams were looking to secure all three points in a bid to boost their title bid but in a game that was highly competitive, the two sides failed to find the back of the net.

The result leaves Kotoko at the summit of the table with 35 points while Olympics remain in 2nd place with 34.

However, Karela United may return to the summit of the table should they secure a win over Dreams FC in the yet to be completed game.