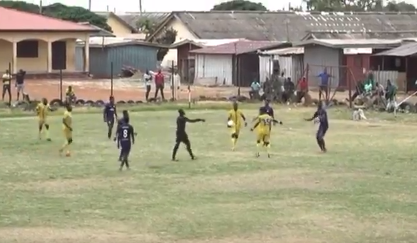 There are terrible decisions that can be described as genuine mistakes by referees and then there are those that leave fans wondering if everything is alright with the referee.

Last weekend, the Ghana Division One League witnessed what many are now calling the ‘worst penalty’ in the history of football.

In the match between Accra City Stars and Accra Lions in Teshie, referee Abdul Karim Ganiu awarded a late penalty to City Stars to pull level after Lions had led throughout the game and looked on their way to victory.

Lions went into the game 3 points behind Zone II league leaders Tema Youth. Victory would have taken them level on points with the leaders and they seemed to be on their until referee Ganiu’s inexplicable decision.

After the video was shared on twitter, fans were up in arms and called for the referee to be arrested.

See Video of the incident below:

How’s this a penalty? Some Ghanaian referees don’t deserve to be doing this 🤦🏾‍♂️🤦🏾‍♂️ pic.twitter.com/8ASRf6JRvA

See the reaction of some fans below:

As we always call for fans to be arrested and sentenced, some referees also need to be imprisoned

The ref has been compromised. If you have play at the colts and any division before you'll understand. They sometimes tell you to fall down in the 18 yard box

The Penalty was awarded before the player received the pass☁️🙆☁️…… Asem Paa nie, no wonder some officials are been beaten @Fentuo_