Arsenal fans protest against Kroenke prior to Everton clash 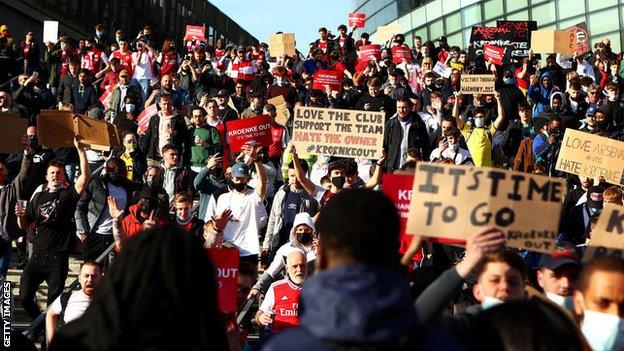 Arsenal supporters protested against owner Stan Kroenke and the club’s involvement in the failed European Super League project with a protest outside the Emirates Stadium on Friday before their match against Everton.

Hundreds of fans could be seen outside the club’s ground before their Premier League game, with many supporters voicing their intent for owner Kroenke to leave the club and some hanging up banners and setting off flares.

Prior to Friday’s planned protest, the Arsenal Supporters’ Trust warned supporters to abide by social distancing guidelines and adhere to public health coronavirus protocols outside the Emirates.

The demonstration follows similar gatherings from fans at Elland Road on Monday night before Leeds’ 1-1 draw with Liverpool, and a large number of Chelsea fans who protested outside Stamford Bridge on Tuesday before the Blues’ game against Brighton.

A small number of Manchester United fans also broke into the club’s Carrington training ground to voice their discontent with the Glazer ownership on Thursday.

On Sunday, Arsenal, along with Chelsea, Liverpool, Manchester City, Manchester United, and Tottenham confirmed they were joining a breakaway European Super League, but all six English sides decided to pull out of the newly-formed competition on Tuesday night amid almost universal derision towards it from fans, players and managers, and the threats of bans and sanctions from football governing bodies.

Although Arsenal apologised to their supporters in an open letter for their part in the botched breakaway project, conflict between Gunners supporters and the club’s hierarchy appears to have intensified.

A number of fans put up banners outside the Emirates Stadium earlier in the week which expressed displeasure towards their decision to join a Super League.

Stan Kroenke – the club’s majority shareholder since 2011 who struck a deal to assume full control of the club in 2018 – has faced calls to step down from his role in the wake of the collapsed Super League initiative.