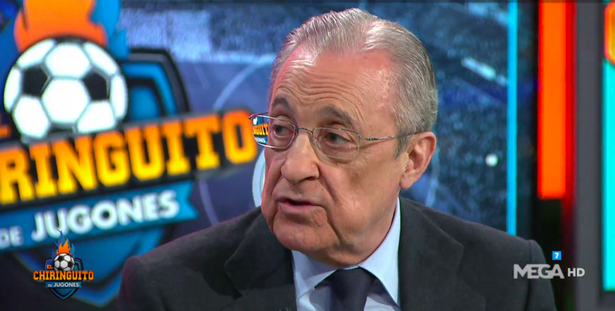 The Chelsea fans who protested against their team’s involvement in the European Super League outside Stamford Bridge earlier this week were praised by the wider football community.

However, Florentino Perez – the European Super League’s chairman – has made the bizarre claim that only 40 people were there.

Curiously, Perez then went on to say during his interview with El Larguero on Wednesday evening: “If you want, I will tell you who took them there.”

Images and footage from the anti-European Super League protests clearly show there were many more than 40 people who turned up at Stamford Bridge ahead of Chelsea’s Premier League clash against Brighton on Tuesday.

The moment these supporters discovered Chelsea had pulled out of the European Super League was even captured on camera.

However, Perez’s claim about the group who turned up to protest will certainly raise eyebrows.

Per Fabrizio Romano, Perez told El Larguero: “Chelsea fans? They were 40 people outside Stamford Bridge… and if you want, I will tell you who took them there.”

The Real Madrid president added: “Who took Chelsea fans at Stamford Bridge are the same people who put those anti-#SuperLeague shirts on Cadiz tonight…”

Cadiz’s players, who were beaten 3-0 by Madrid on Wednesday night, wore t-shirts which said: “Super League? Football is for everyone”.

So, what else did Perez say during his latest interview?

Basically, he doubled down. While Joel Glazer and John W Henry issued apologies to the supporters of Manchester United and Liverpool, Perez said he was “sad and disappointed” that the ESL plan has been scuppered.

The Spaniard also believes that one of the English clubs were responsible for the other five eventually wobbling.

“I think one of the 6 Premier League clubs weren’t really convinced of the project,” he continued, “and it became contagious to the rest of them.”

What else did Perez say about the European Super League?

In a statement likely to concern many football fans, Perez added: “If this project didn’t work, another one will. Remember: all the 12 clubs have signed a [binding] contract.”

And the 74-year-old also claims that no club has officially left the ESL yet because they must pay a penalty fee.

“Nobody has yet paid the penalisation fee for leaving the Super League,” he said. “We are almost all still in this, they have not officially left yet…”

Return of Fans: Here’s how many fans each club can admit