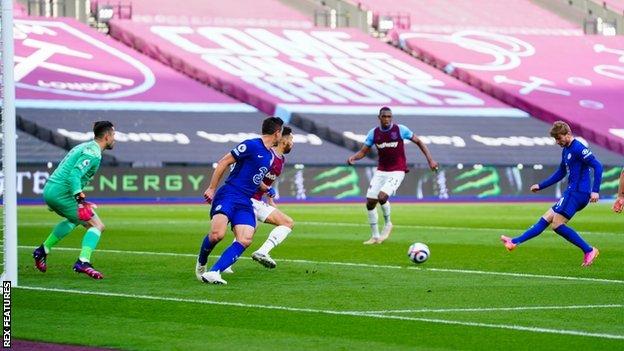 Werner, who has struggled to make a significant impact since joining for £47m last summer, started and finished the move that settled a tightly-fought game.

West Ham struggled to create chances and finished the game with 10 men after Fabian Balbuena was shown a straight red card in the 81st minute after catching Chilwell’s leg with his follow through while making a clearance.

Referee Chris Kavanagh watched a replay on the pitchside monitor before dismissing the Paraguay defender.

The Hammers remain fifth in the table, three points behind Chelsea, after Liverpool’s failure to beat Newcastle earlier on Saturday.

In what was billed as a huge game in the race for the top four, West Ham were hoping to deliver a victory for the underdog at the end of a week when the so-called “big six” tried to break rank and join the European Super League.

David Moyes’ side have enjoyed a fine run of form to raise hopes they could secure a Champions League spot.

However, they did not register an attempt on target until after half-time as Chelsea extended their unbeaten run away from home under Tuchel to 10 games in all competitions.

West Ham wanted a penalty when the game was goalless after Tomas Soucek’s shot struck Cesar Azpilicueta in the torso before hitting his arm, while Werner missed a glorious chance to double the lead after Mason Mount’s shot was parried into his path but the striker screwed it wide.