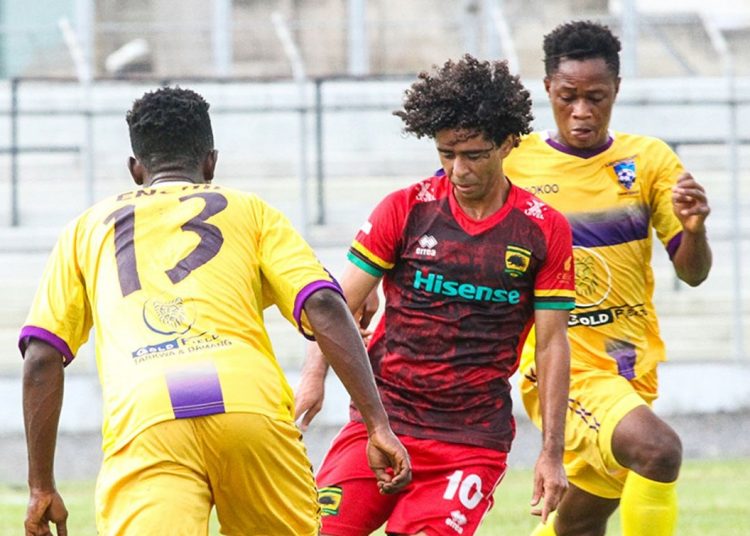 Medeama moved top of the Ghana Premier League table on Saturday after they came from a goal down to beat Asante Kotoko 2-1 in Obuasi.

Emmanuel Gyamfi shot the Porcupine Warriors ahead in the 14th minute but Prince Opoku Agyemang levelled for the visitors on the half hour mark before Richard Boadu scored what proved to be the winner on the stroke of half time.

Mariano Barreto’s men had hoped to return to winning ways following their 0-0 draw with Great Olympics last weekend and started sprightly, with Imoro Ibrahim and Augustine Okrah combining well to set up Gyamfi who fired low for the opener inside 14 minutes.

Medeama, shocked from the early goal, looked the more settled of the two sides and were duly rewarded for their period of dominance when Opoku Agyemang capitalized on Kotoko’s failure to clear their lines to stump home the equalizer.

The goal gave Yaw Preko’s men the momentum and they made sure it counted as Richard Boadu made it 2-1 for the visitors just before the break.

At the start of the second half, Barreto brought on Adom Frimpong for Emmanuel Sarkodie in an attempt to wrestle back the midfield which had been dominated by the Tarkwa boys.

Then Godfred Asiamah came on for the largely quiet Andy Kumi and by the hour mark, Kotoko had made three substitutions with Patrick Asmah also replacing Emmanuel Gyamfi.

But the changes did little to turn the tie around with Kotoko failing to create any noteworthy chances as Medeama held on for victory.

The win for the Mauves and Yellow means they displace Kotoko at the top of the table, going one point above their vanquished.

Watford clinch promotion back to the Premier League