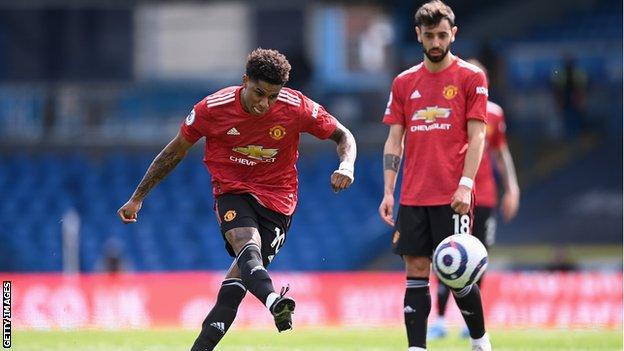 Manchester United failed to impose their perceived superiority over old rivals Leeds and had to settle for a point from a disappointing draw.

In a game of few chances, Marcus Rashford came closest with a free-kick just before half-time.

But memories of a forgettable encounter on the pitch will remain because of off-field issues.

That it was not set up by any of the organised Manchester United supporter groups just underlines the strength of feeling created by this week’s European Super League controversy, fuelling an already negative view of the club’s American owners.

As one of England’s biggest clubs themselves, Leeds will be satisfied at extending their run of home draws against ‘Big Six’ opposition to five, with only Tottenham left to come.

The result means Manchester City will be crowned Premier League champions next weekend if Pep Guardiola’s side beat Crystal Palace on Saturday and second-placed United lose at home to Liverpool on Sunday.