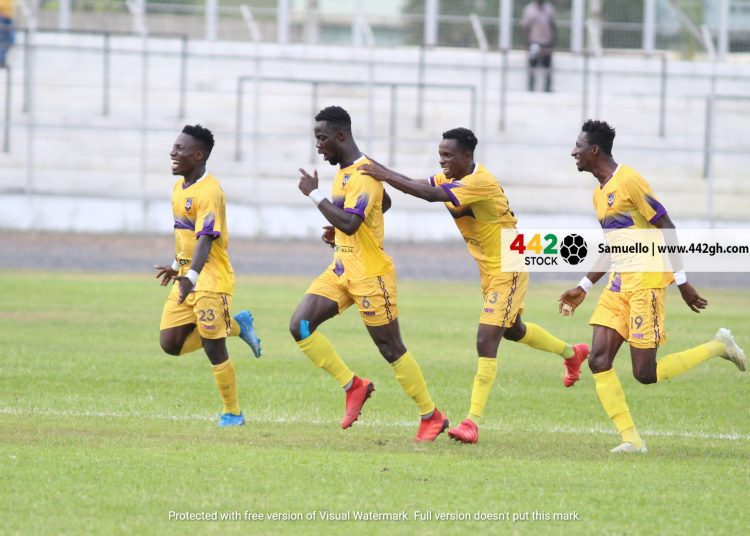 Accra Hearts of Oak scored late to salvage a 1-1 draw away to Karela United at Anyinase in Match Week 21 action.

A win for both teams would have taken them to the top of the Ghana Premier League log.

After a goalless first-half, the hosts found a breakthrough in the 71st minute through Maxwell Boakye, who had come in as a substitute in place of Richard Berko.

It seemed the game was going to go in Karela’s favour until Kwadwo Obeng Jnr leveled for Hearts with a beautiful header from Ibrahim Salifu’s corner in the 85th minute.

The result leaves Hearts in 4th place, a point ahead of Karela United in 5th place.

At the Obuasi Len Clay Stadium in Kumasi, Ashantigold recorded a thumping 4-0 win over Bechem United.

The win takes the Miners’ undefeated streak in the second half of the season to four matches having secured two home wins and two away draws in the process.

The hosts wasted no time in getting on with business as Yaw Annor opened the scoring in the 11th minute.

Addai then doubled their lead from the spot four minutes later after he was brought down inside the box by defender Sampson Adjei Adjetey.

Ashgold will go into the first-half with a 3-0 advantage as Seth Osei found the back of the net at the stroke of half-time.

Things went from bad to worse for the visitors as centre back Charles Amponsah Bosompem was sent off in the 58th minute after being cautioned for the second time in the game.

David Abagna Sandan came off the bench to seal the win for the home team in the 84th minute.

At the Red Bull Arena in Sogakope, WAFA bounced back from defeat to Elmina Sharks in Match week 20 to secure a narrow 1-0 win over Techiman Eleven Wonders.

Abdul Basit Issah’s first goal of the season for the academy boys in the 33rd minute was enough to do the damage for the home team.

WAFA could have scored more but were wasteful in front of goal.

The result sees Eleven Wonders drop into the relegation zone with 22 points from 21 games played.

In Accra, Legon Cities and Dreams FC shared the spoils in a 1-1 draw at the Accra Sports Stadium.

The hosts took the lead right before half-time through Hans Kwofie in the 44th minute, assisted by Jonah Attuquaye.

Dreams Fc had the opportunity to go on level terms but could not find the back of the net.

However, Jalilu Abdulai in the 58th minute equalized for the visitors to secure a vital away draw.

Elsewhere, Sam Adams’ brace in the first half gave Aduana Stars a 2-1 victory over Elmina Sharks as the Dormaa-based side returned to winning ways following their 4-0 defeat at the hands of Bechem United last week.

Adams opened the scoring in the 3rd minute  from the spot, before doubling the lead in the 18th minute as Asare Bediako’s men continued dominating the game.

The first-half would end in a 2-0 advantage to the hosts.

After the break, Elmina Sharks piled pressure on Aduana Stars as they looked to find a way back into the game but all they could get was a consolation goal Justice Mensah in the 85th minute.
In the game involving the two teams at the bottom of the table, King Faisal came out on top as they beat Inter Allies 1-0 at the Theatre of Dreams in Dawu.
Inter Allies were looking to bounce back from their 1-0 defeat to Accra Hearts of Oak at the Accra Sports stadium but succumbed to yet another defeat this season.
Zubairu Ibrahim’s lone goal in the 15th minute was enough to secure all three points for the visitors to increase their chances of escaping the relegation zone.
The result leaves Inter Allies in last place with just 16 points from 21 games.
On Saturday,

Medeama moved top of the Ghana Premier League table after they came from a goal down to beat Asante Kotoko 2-1 in Obuasi.

Emmanuel Gyamfi shot the Porcupine Warriors ahead in the 14th minute but Prince Opoku Agyemang levelled for the visitors on the half hour mark before Richard Boadu scored what proved to be the winner on the stroke of half time.

The win moves the Mauve and Yellows to the top of the summit displacing Kotoko with one point separating both teams.

At the Cape Coast stadium, Ebusua Dwarfs were ruthless as they thrashed Accra Great Olympics 4-1 in Match Week 21 action. Goals from Simon Nartey, Kofi Jnr, Michael Ohene Asamoah and Enoch Affram gave Dwarfs a commanding lead before Gladson Awako scored a consolation for the Dade Boys in injury time.
Great Olympics have  now failed to win any of their last three games since the start of the second round.
On a day that was characterized by upsets, Liberty Professionals recorded a third straight win on the bounce with a 2-0 victory over Berekum Chelsea at the Sogakofe Red Bull Arena.
The first-half would end with the hosts having the advantage through Abraham Wayo’s goal in the 6th minute.
The visitors tried to find the equalizer in the second-half but Liberty were resolute in defense.
Liberty dominated in possession but had little to show for it in the final third.
However, Amadu Awudu doubled the lead and sealed the win for the home team in the 78th minute.
The win takes them to 14th place with 24 points, two points above the relegation zone.
ShareTweetSend
Previous Post