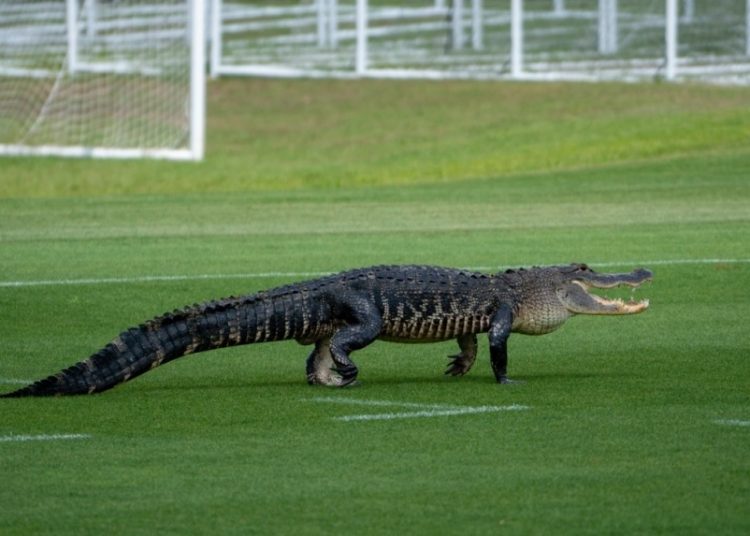 The players of Toronto FC had to halt their training session for a few minutes after an alligator invaded the pitch.

The MLS held a training session at the ChampionsGate Resort near Orlando in Florida, which was closed to the public.

But clearly, the gator did not get that memo.

While staff fled, the more courageous players inched closer for a better view.

Eventually, a resort staffer in a golf cart chased the gator away, allowing the session to continue.

“All I can tell you is this, there was a massive alligator. My players are running towards the gator as I went the other way,” Toronto FC coach, Chris Armas, told The Canadian Press.

“Listen, we talk about (being) fearless and aggressive around here, but I thought we wouldn’t think about that at that moment.”

The side has had to relocate to Florida due to travel restrictions imposed to address the spread of coronavirus.

The club saw the funny side of the incident tweeting: “Toronto FC have agreed to terms with Ale Gator on a short-term loan,” the club tweeted. “The deal was completed using our newly-acquired GAM (Gator Acquisition Money).”

A number of the responses to their tweet have been hilarious with even transfer expert, Fabrizio Romano getting involved.

Adds a bite to the midfield. Recovery speed leaves a bit to be desired.

You’ll he disappoint to learn he puts both his first and last name on the shirt.

Can he play centre half?!? Turns quicker than big Gonzalez

Guy didn't get the memo about closed training 🐊

Gator Country | All For One: Moment presented by @Bell pic.twitter.com/C9Pzm119di