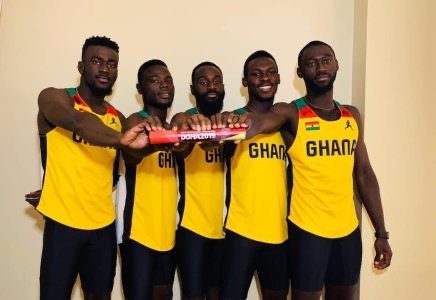 Member of Ghana’s 4x100m team, Joseph Paul Amoah, is confident the current team can break the national record in 2021.

Amoah was part of Ghana’s quartet, including Sean Sarfo Antwi, Oduro Manu and Benjamin Azamati, that booked their place at the Tokyo Olympics, after finishing second, behind The Netherlands, in their heat at the World Relay Championships over the weekend.

With the current national record in the 4 x 100m standing at 38.12secs set way back in 1997, by the quartet of Abu Duah, Eric Nkansah, Aziz Zakari and Emmanuel Tuffour during the World Championships in Athens, Paul Amoah believes the 24 year old record can be broken this year, by this current team under the right guidance.

“Absolutely! I think we have a very good squad. And we can achieve big things if given the right support and planning,” he said in an exclusive interview with Citi Sports.

“I’ve been looking at our individual times, and we have very impressive 100m and 200m times, faster than the team that have the national record.

“If we’ve been able to produce these results at the World Relay Championships, after just a day of training, we can definitely smash the national record this year, if we have more quality time training together,” he said.

Ghana, who are the current African Games Champions, will be represented at the Olympics in the 4x100m event for the first time since 2004.