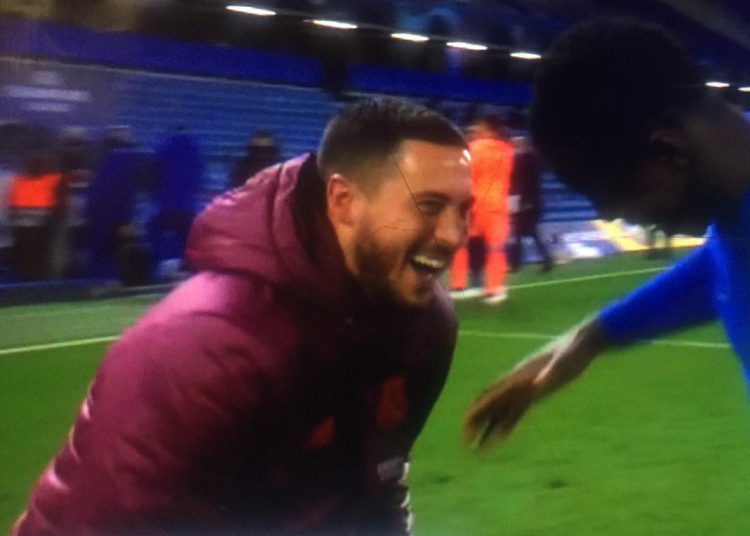 Eden Hazard might have left Chelsea in 2019 to seek European glory with Real Madrid but judging from his demeanour at the end of their tie at Stamford Bridge, he still has some blue blood in him.

With Chelsea claiming a 2-0 win on the night, and a 3-1 win on aggregate, to qualify for the Champions League final, all of Madrid’s players were clearly upset.

All but one it seems.

Hazard, who spent seven years at Chelsea, was obviously happy to see his old teammates, including Caesar Azpilicueta and Kurt Zouma, with whom he shared a laugh.

While Chelsea fans were pleased to see their former favourite catching up with old friends, Madrid fans were less accommodating, expressing their displeasure over the Belgian’s apparent lack of irritation at Los Blancos’ exit.

They were particularly upset because, since his big-money move from Chelsea, Hazard has missed a large chunk of his time in the Spanish capital through various injuries.

He wasn’t his blistering self either on Wednesday, as Chelsea progressed to their second Champions League Final in nine years.

He’s BLUE through and through !! 🤣 pic.twitter.com/548M0okDmm

He is about to feel the heat 🔥 from the Fanbase 😡😡

Club Record Signing, Eden Hazard after being eliminated from the Champions League. pic.twitter.com/tvzXdb9yom

He’s BLUE through and through !! 🤣 pic.twitter.com/548M0okDmm

Eden Hazard was happy for Chelsea 💙