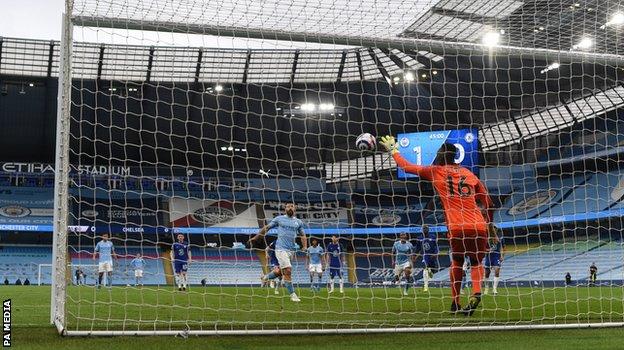 Chelsea tormented Manchester City once again by delaying their title-winning party and boosting their own top-four hopes with the help of an awful Panenka penalty miss by Sergio Aguero during their 2-1 comeback win at the Etihad on Saturday.

Hakim Ziyech, who had ended City’s Quadruple dreams in a FA Cup semi-final last month, was on target again to cancel out Raheem Sterling’s opener for the much-changed hosts, before Marcos Alonso (90+2) grabbed a deserved stoppage-time winner for the visitors against a side they will meet in the Champions League final on May 29.

A mis-control from Aguero – City’s most-famous title-clincher of all – had allowed Sterling to find the net for the first time in 13 games on 44 minutes but another error from the striker moments later proved far more costly, with his weak spot-kick easily saved.

Chelsea capitalised and had the upper hand throughout the second period, with Timo Werner and Callum Hudson-Odoi seeing efforts ruled out for offside after Ziyech’s leveller on 63 minutes, and they leapfrogged Leicester into third place in the Premier League with Alonso’s last-gasp finish from close range.

Chelsea are now six points clear of fifth-placed West Ham in the top-four race, while City – who were aggrieved not to be awarded a late penalty when Sterling was tumbled by Kurt Zouma – could still reclaim the crown this weekend if Manchester United lose at Aston Villa on Sunday.