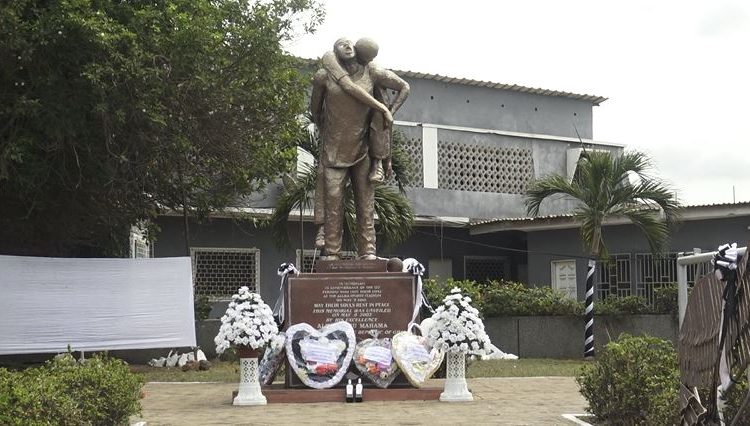 The Ghana Football Association (GFA), Sports Ministry (MOYS), National Sports Authority (NSA) and some Ghana Premier League clubs have marked the 20th anniversary of the May 9th disaster with a commemoration service at the Accra Sports Stadium.

The sad incident occurred on Wednesday May 9, 2001 at the Accra Sports Stadium when 127 football fans died after a stampede at the ground.

The incident happened during a league match between Hearts of Oak and Asante Kotoko when spectators had to scramble their way out of the ground as they sought relief from tear gas canisters that were being fired at them by police officers seeking to control angry spectators.

Addressing the media, the Sports Minister, Mustapha Ussif urged spectators to have ‘zero tolerance’ of fan hooliganism at league centers.

“Today is a solemn occasion which marks a dark day in the history of football in Ghana and African football,” he said.

“We will never forget this day. As we mark today, we have to keep in mind the lessons we have learnt out of this carnage that happened 20 years ago.

“Sports is the foundation which peace and harmony is built but on that day, we missed our mark and acted wrongly and the effect is the unimaginable national tragedy.

“The greatest tribute we can give to the departed is for all stakeholders to continue to join hands and ensure that never again should we witness this kind of event. There has been a significant improvement in maintaining sanity during matches but scores of hooliganism in recent times are disturbing.

“We cannot commemorate this every year and still record cases of hooliganism even if they are in isolated cases. It is incumbent on all of us to aggressively pursue and ensure zero tolerance of fan hooliganism in the country which is the only way to truly pay tribute to our departed brothers and sisters,” he concluded.

Speaking at the commemoration event, the Vice President of the GFA Mark Addo said almost all the children of the victims of the May 9 disaster have been taken care of through the May 9 Disaster Fund which was set up to provide relief for the families of the diseased.

“This morning, the Minister for Youth and Sports and I had a conversation with Christopher Annan, the administrator to the Board of Trustees of the May 9 Disaster Fund and he informed us that out of the 148 children who were supposed to be taken care of, almost all of them, in terms of their mandate have been able to complete senior high school with many of them in the tertiary school, some being doctors and a few with a PhD.”

“From the perspective of the GFA, we have improved on the brand of football in Ghana, we will continue to put in place structures that will help minimize and educate people about the essence of the game which is centred on love and not violence. It is a painful sight when we see the few cases of hooliganism in the various divisions of football. These things must stop and that is rightfully our theme for this year.”

Mr Christopher Annan, Secretary to the Board of Trustees of the May 9 Disaster Fund, said his outfit had been able to cater for the educational needs of 100 children of the victims, with 48 others at the various stages of completion of their education.

He explained that the mandate of the fund could only be over when the last child of the deceased completed senior high school by age 21.

“The core mandate of the fund was to cater for the educational needs of the children left behind by the victims and as I speak to you, we have been able to deal with 100 of them, with 48 at various stages of completing their education,” Mr Annan said.

The two clubs at the centre of the disaster, Accra Hearts of Oak and Asante Kotoko, took to social media to mark the day and they were joined by other clubs.

The minister later led dignitaries present and a representative of the victims to lay wreaths to the departed souls of the disaster that had been described as the worst in Africa.