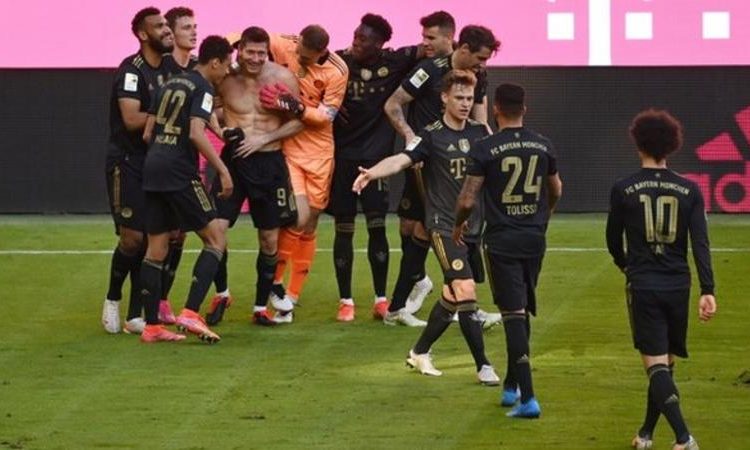 Bayern Munich’s Robert Lewandowski scored in the last minute of the season to break Gerd Muller’s 49-year record of Bundesliga goals in a campaign.

Lewandowski looked poised to be frustrated but pounced in the 90th minute for his 41st goal of the season.

The Poland striker now has 53 goals in 46 games for club and country heading into Euro 2020.

The home side scored four times in the first half against Augsburg with Manuel Neuer also saving a penalty.

Bayern, who had already wrapped up their ninth consecutive Bundesliga title, said goodbye to their manager and a number of star players who will leave this summer.

Hansi Flick was appointed in November 2019 and claimed the Champions League, two Bundesliga titles, the German Cup, Uefa Super Cup and Club World Cup during his spell in charge.

David Alaba and Javi Martinez are soon out of contract and both played their final games for the side, as did Jerome Boateng – who left the field in tears when he was replaced on the hour mark.

But the day belonged to Lewandowski, who was repeatedly thwarted by Augsburg keeper Rafal Gikiewicz before reacting quickest to a fumble to roll the ball into an open net.

The striker took his shirt off in celebration before coming to the side of the pitch to embrace the departing Flick.

Bayern took the lead through Jeffrey Gouweleeuw’s own goal and doubled their lead courtesy of Serge Gnabry’s header from close range.