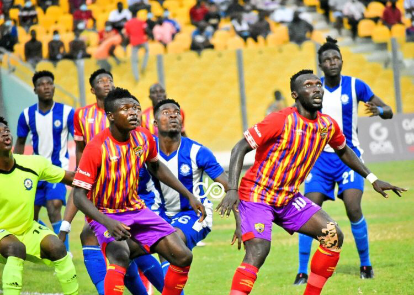 Hearts of Oak had to settle for a draw after local rivals Great Olympics snatched a point in a thrilling game at the Accra Sports Stadium.

Hearts started the brighter of the two teams, opening the game with high intensity which caused a couple of problems for Great Olympics.

Kojo Obeng Jnr had a couple of chances early in the first half, with two headers, one which was comfortably saved by the Olympics goalkeeper, and the other which went narrowly wide.

Isaac Mensah thought he had given the Phobians the lead, when his shot seemed to have crossed the line after hitting the post, but the referee waved for play to continue.

The Phobians continued to dominate the first half, and should’ve taken the lead when Isaac Mensah failed to trouble the goalkeeper with a tame effort just 6 yards out.

Obeng Jnr went close again on the stroke of halftime but his near post shot just creeped wide.

Hearts continued to search for the opening goal after the restart, and were finally rewarded for their efforts in the 49th minute when Emmanuel Nettey fired in after Salifu Ibrahim’s corner was palmed out by the Olympics goalkeeper.

Hearts continued to dominate and looked to have doubled their lead, but Isaac Mensah somehow missed from 3 yards from an Afriyie Barnie shot cross.

Olympics slowly started gaining a foothold on the game, with captain and talisman, Gladson Awako at the heart of things.

The Dade boys grabbed the equalizer against the run of play, when Maxwell Abbey Quaye stole ahead of his marker to head home, after a uncharacteristic mistake from Hearts’ Raddy Ovouka.

Hearts continued to push for the winner, and were almost punished on a counter attack, when Olympics forward, Mudasiru, dribbled past Hearts goalkeeper Richard Attah but saw his shot go wide.

The result means Hearts still remain top of the table by virtue of superior goal difference with 50 points ahead of bitter rivals Asante Kotoko.