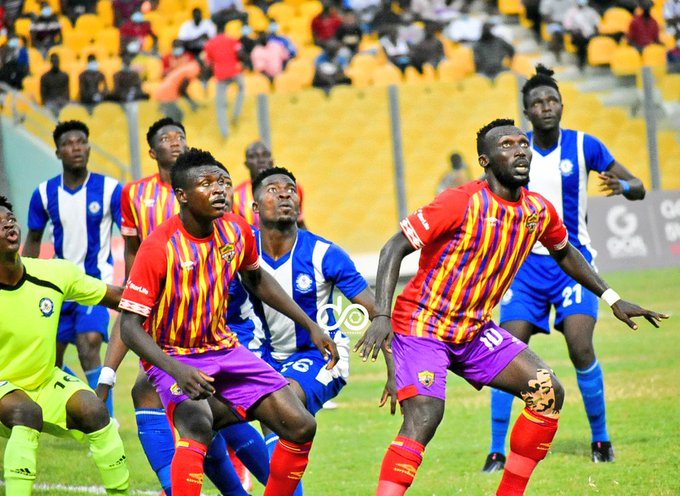 Kumasi Asante Kotoko have gone level on points with league leaders Accra Hearts of Oak after the Porcupine Warriors beat Ashantigold 1-0 on Sunday before Hearts of Oak were held to a 1-1 draw by city rivals Accra Great Olympics in Accra.

Hearts of Oak had to settle for a draw after local rivals Great Olympics snatched a point in a thrilling game at the Accra Sports Stadium.

Hearts of Oak dominated the early exchanges and were finally rewarded for their efforts in the 49th minute when Emmanuel Nettey fired in after Salifu Ibrahim’s corner was palmed out by the Olympics goalkeeper.

The Dade boys grabbed the equalizer against the run of play, when Maxwell Abbey Quaye stole ahead of his marker to head home, after an uncharacteristic mistake from Hearts’ Raddy Ovouka.

The result means Hearts still remain top of the table by virtue of superior goal difference with 50 points ahead of bitter rivals Asante Kotoko.

Earlier in the day, Asante Kotoko SC beat Ashantigold 1-0 to win the Ashanti Derby at the Obuasi Len Clay stadium.

Fabio Gama scored the only goal of the game in the 23rd minute to give the Porcupine Warriors  all three points and keep their hopes of winning the Ghana Premier League alive.

Defender Abdulai Massaudu scored the opening goal for the hosts in the 25th minute, before Agyenim Boateng doubled the lead 11 minutes into the second-half.

Dreams move up to fourth on the league standings with 45 points, one behind Accra Great Olympics.

Liberty Professionals breathed life into their survival battle as they overcame WAFA 3-2 in Sogakope.

The hosts took the lead through Kingsford Frimpong in the 19th minute but WAFA leveled through Augustine Boakye in the 24th minute.

WAFA then took the lead for the first time in the match through Justus Torsutsey in the 31st minute.

Liberty kept pushing for the equaliser and were rewarded with a penalty after Prosper Ahiabu was brought down in the box by WAFA goalkeeper Osei Bonsu.

Abraham Wayo made no mistake as he found the back of the net to draw the hosts level before Kweku Karikari put Liberty back in front in the 72nd minute.

The win sees Liberty move up the table to 14th.

Simon Martey’s second half goal was enough to seal victory for Ebusua Dwarfs against Aduana Stars.

At the golden City Park, Berekum Chelsea returned to winning ways after they thumped King Faisal 5-0.

Abdul Basit, Bright Amponsah and Kofi Owusu scored to put the hosts 3-0 up at half-time.

Berekum Chelsea did not let up in the second-half and added two more goals from Paul Attah Agyei and Abdul Basit to record the win.

The hosts took the lead three minutes into the game after captain Tetteh Nortey scored a penalty.

Alex Asamaoh then ensured Eleven Wonders went into half-time with a 2-0 lead.

Bechem pulled one back via a penalty taken by Stephen Owusu but that was not enough as the home team held on for the maximum points.

Medeama SC pipped Karela United 1-0 to climb to third on the league table.

Defender Vincent Atingah headed in the only goal of the game in the 81st minute to hand victory to the Mauve and Yellows.

The two time FA Cup champions were under a lot of pressure going into the game after losing 3-0 to Inter Allies last week, but they were able to overcome Karela United to record the win.

Legon Cities will take on Inter Allies at the Accra Sports Stadium at 6pm.

The Royals will be hoping to continue their impressive form that has seen them lose just one game in their last four,