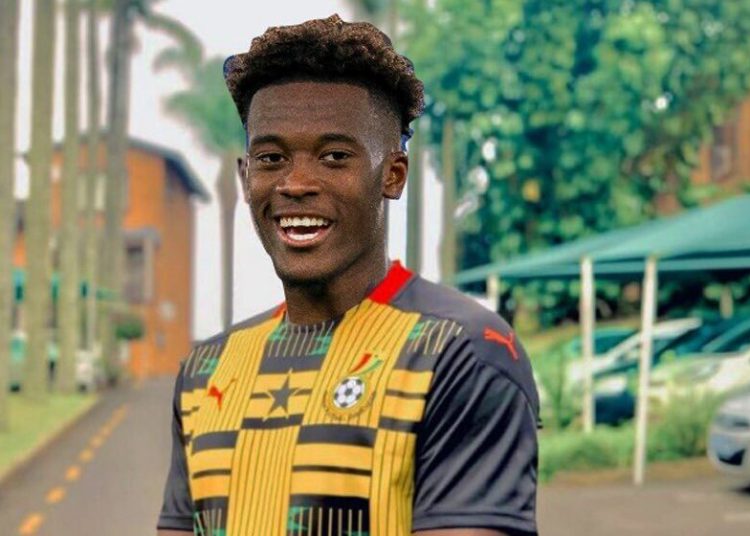 Chelsea star, Callum Hudson-Odoi has hinted at a possible switch of nationality, describing Ghana as “home”.

The 20-year-old is still eligible to play for the Black Stars of Ghana according to the FIFA rules. The rule states that:

Players can now switch national teams provided they are eligible to represent them as long as they have played no more than three matches (including friendlies), none of the matches were in the final tournament of the FIFA World Cup or confederation competition, and they all happened before the player turned 21.

The Champions League winner is currently in Ghana for the summer holidays after helping his club side to European glory and was met by popular Ghanaian musician, King Promise.

Addressing the press on Sunday at the Alisa Hotel, Odoi highlighted why he chose to represent the Three Lions of England instead of the Black Stars of Ghana.

The Chelsea youngster has played for England’s U16, U17, U18, U19, U21 and senior teams, but he can still represent Ghana as he has not played more than three games for the Three Lions.

“So it was the thing obviously choosing Ghana or England, and at the end of the day, I said I always had the right people around me who always advise me – what’s right, what’s wrong. England came and I said yeah, let me go and play for my country. But I said Ghana is my home as well, so we’ll see, we’ll see. You’ll never know, so,” he said.

Callum Hudson-Odoi has been playing for Chelsea Football Club since 2007 and has gone on to win the Europa League and Champions League with the Blues and was part of the England U-17 side that won the World Cup in India.